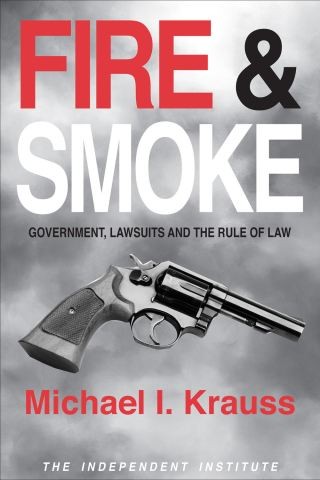 Government, Lawsuits, and the Rule of Law

The state of Mississippi’s lawsuit against tobacco companies in 1994 was quickly emulated by more than a dozen other states and then the federal government. Not to be outdone, more than a dozen cities and the federal government have followed the city of New Orleans’s lead and sued gun manufacturers. Do these lawsuits signal new directions for more effective public policy or a new and dangerous trend whereby governments use tort law to achieve public policy objectives they were unable to accomplish legislatively? In this new policy report, so-called government “recoupment” lawsuits are carefully examined and found to be flagrant abuses of the constitutional separation of powers, seriously undermining over 200 hundred years of common-law torts adjudication. Author Michael Krauss, a leading legal scholar on the relationship between tort law and personal freedoms, systematically dissects the tobacco and firearm recoupment lawsuits. He shows how such lawsuits betray every criterion of sound, effective, and just tort law. The lawsuits against gun manufacturers can show no damages, no proximate causation, and no wrongdoing. Similarly, governments have no direct damages to claim against tobacco manufacturers and cannot legally stand in the place of individual smokers or their families. This book concludes that recoupment lawsuits are incompatible with civil freedoms, representative democracy, and the rule of law upon which institutions of a free society depend.

Michael I. Krauss:
Michael I. Krauss obtained his B.A. cum laude from Carleton University in Ottawa and his law degree from Quebec’s Université de Sherbrook. He obtained his LL.M. from Yale Law School and completed his doctoral residency as the law and economics fellow at Columbia Law School. He is currently a professor of law at George Mason University, where he teaches torts, product liability, legal ethics, and legal philosophy. In addition to his teaching and research functions, he is president of the Virginia Association of Scholars and a member of the Board of Governors of the Education Section of the Virginia State Bar. He lives in Arlington, Virginia.