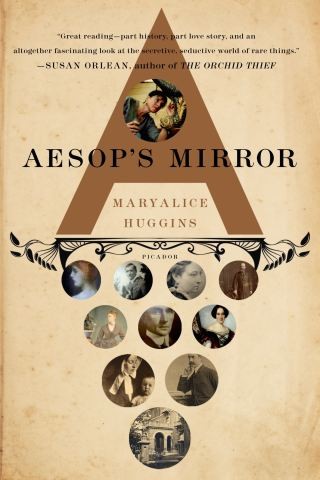 "Everything I needed to know about Fox and Grapes mirror, I knew the moment I first saw it"

What antiques restorer Maryalice Huggins knew when she stumbled across the mirror at a country auction in Rhode Island was this: She was besotted. Rococo and huge (more than eight feet tall), the mirror was one of the most unusual objects she had ever seen. Huggins had to have it.

The frame's elaborate carvings were almost identical to a famous eighteenth-century design. Could this be eighteenth-century American? That would make it rare indeed. But in the rarefied world of American antiques, an object is not significant unless you can prove where it's from. Huggins set out to trace the origins of her magnificent mirror.

Fueled with the delightfully obsessive spirit of Susan Orlean's The Orchid Thief, Aesop's Mirror follows Huggins on her quest as she goes up against the leading lights of the very male world of high-end antiques and dives into the historical archives. And oh, what she finds there! The mirror was likely passed down through generations of the illustrious Brown family of Providence, Rhode Island.

Throughout history, mirrors have been seen as having mystical powers, enabling those who peer into them to connect the past and the future. In Aesop's Mirror, Maryalice Huggins does just that, creating a marvelous, one-of-kind book about a marvelous, one of-a-kind American treasure.

Maryalice Huggins is a restorer and gilder of antique mirrors. She has worked for museums, interior decorators, and private collectors. She lives in Middletown, Rhode Island.