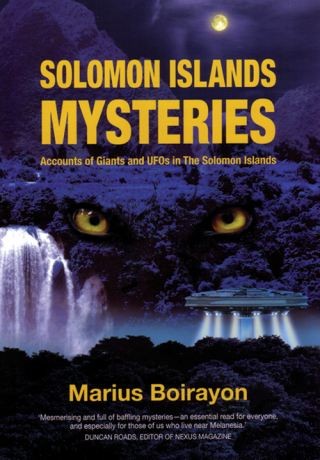 Accounts of Giants and UFOs in the Solomon Islands

Near where the sunken warships of the Battle of Guadalcanal lie, glowing UFOs rise out of the Pacific, fly into the mountains and disappear into jungle lakes. Here, a tropical paradise exists with inexplicable, ancient ruins and puzzling writings of an unknown culture. Steamy, rugged mountain ranges are inhabited by strange Sasquatch-like creatures. They have come down to the villages to kidnap the locals for generations. Terrifying stories of abduction and cannibalism are passed on by the villagers to their children. These are some of the incredible tales that the Solomon Islanders have lived with for decades and you will read about in this spellbinding book. Author Marius Boirayon is the son of the World War II central France maquis (resistance) leader, and grew up in Mount Hagen in the Papua New Guinea Highlands. Following a career in the Royal Australian Air Force and as an aircraft/helicopter engineer working in outback Australia, he decided in 1995 to go to the Solomon Islands to live.