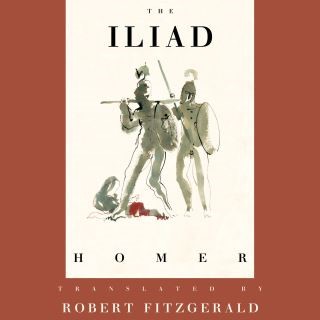 Since it was first published more than forty years ago, Robert Fitzgerald's prizewinning translation of Homer's battle epic has become a classic in its own right: a standard against which all other versions of The Iliad are compared. This definitive translation of Homer's epic is timeless in its authority and always fresh in its vivid rendering of the preeminent war story of the Western world.

In keeping with the oral tradition of the time, Dan Stevens's extraordinary narration makes this epic tale come alive. The listener becomes totally immersed in the adventure and drama of the story – this is the way The Iliad was meant to be experienced.

Also included on the program is a portion of the poem read in ancient Greek so that listeners may experience the lyricism and music of the original language.

Dan Stevens: Dan Stevens is a film, television, and theater actor whose many celebrated performances include Downton Abbey’s Matthew Crawley. On stage, Stevens has appeared in numerous Shakespeare productions for the Peter Hall Company as well as West End revivals of Arcadia and The Vortex. He starred in the 2012 Broadway hit The Heiress and is a regular columnist for the Daily Telegraph. His previous audio credits include Mary Shelley’s Frankenstein and Ken Follett’s Fall of Giants.

Robert Fitzgerald's versions of the Iliad, the Aeneid, and the Oedipus cycle of Sophocles (with Dudley Fitts) are also classics. At his death, in 1985, he was Boylston Professor of Rhetoric and Oratory at Harvard.

Homer is a legendary ancient Greek epic poet, traditionally said to be the creator of the epic poems the Iliad and the Odyssey. Homer's works form the groundwork of the Western Canon and are universally praised for their genius. Their formative influence in shaping many key aspects of Greek culture was recognized by the Greeks themselves, who considered him as their instructor.