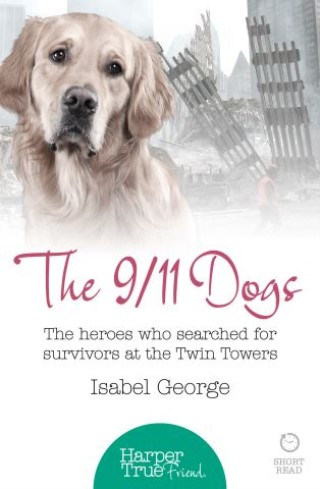 The 9/11 Dogs: The heroes who searched for survivors at Ground Zero (HarperTrue Friend – A Short Read)

Meet the dogs who searched for life amongst the ruins of the Twin Towers.Many heroes were made on 9/11 and in the weeks that followed. Not all of them showed human courage. Some of them could only show that they were truly man’s best friend. German Shepherds, Labradors and Spaniels accounted for the majority of the four-legged heroes.Over three hundred search and rescue dogs worked the pile at Ground Zero and the crash site at the Pentagon. For hours they searched, fighting off exhaustion with sheer determination and they continued every day long after the hope of finding survivors had passed.There were faithful Guide dogs who helped their sightless owners out of the Twin Towers and led them to safety showed unstinting devotion in the face of adversity. And later, therapy dogs arrived to bring comfort to the bereaved and confused. At every stage of the operation, dogs were there helping humankind in various roles. And invaluably, they provided comfort and reassurance and lifted spirits by their pure presence.Sadly many of the dogs are no longer with us but their achievements will never be forgotten. Isabel George was fortunate that the people close to the dogs were pleased to be asked to share their stories. This book is to honour the dogs and their people.

Isabel George: Isabel George is a writer, journalist and PR, who has worked with animal charities, and particularly the PDSA, for many years. She has previously written for children and has also worked with the Imperial War Museum on various events and exhibitions connected with the Animals at War theme.