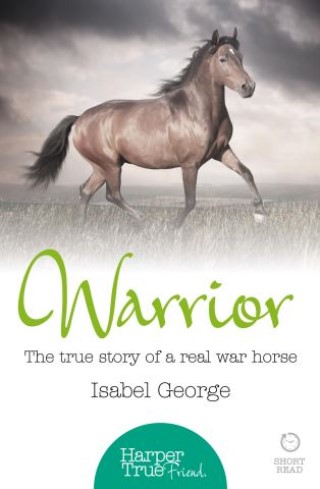 An inspiring and heart-warming short story of devotion and bravery.A thoroughbred horse, Warrior, is passed through various owners before he is shipped to the thick of the action on the Western Front to serve as his current master’s mount for all four years of the First World War.Warrior and General ‘Galloping Jack Seeley’ were involved from the first engagements through to one of the last, the Battle of Moreuil Wood. Together they fought in terrifying battles and witnessed the death of many horses and masters who served alongside them, terrible deaths, but through it all Warrior seemed to pass like a spirit.This is the tale of his heroic wartime exploits and eventual return to the green fields of England. An evocative and powerful story of a real and great war horse.Warrior’s story was the basis for the fictional Joey in Michael Morpurgo’s War Horse.

Isabel George: Isabel George is a writer, journalist and PR, who has worked with animal charities, and particularly the PDSA, for many years. She has previously written for children and has also worked with the Imperial War Museum on various events and exhibitions connected with the Animals at War theme.