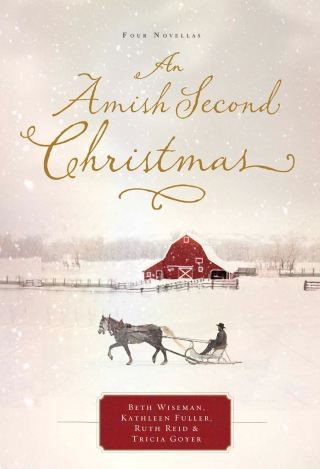 Katherine knows the first Christmas without Elias will be hard for her and the children. But when a mysterious Englischer appears with photographs of her late husband, Katherine  begins to wonder what other blessings Christmas could have in store.

Joy was expecting a wedding proposal from Henry; what she got instead was news of another woman. But when her heartfelt letter to a cousin ends up in the hands of a young cabinetmaker, an unexpected correspondence between two strangers gets interesting fast.

“A Gift for Anne Marie” by Kathleen Fuller

Anne Marie and Nathaniel have been best friends since they were kids. Now things are evolving . . . in ways everyone else predicted long ago. But when her mother suddenly decides to remarry in another state, Anne Marie’s new chapter with Nathaniel looks doomed to end before it begins.

“The Christmas Aprons” by Tricia Goyer

Vanilla crumb pie has been Esther’s mem’s calling card for decades. But when Esther finally gets her hands on the secret recipe, she discovers that vanilla crumb pie is more than just dessert . . . it’s bachelor bait.

Bestselling and award-winning author Beth Wiseman has sold over two million books. She is the recipient of the coveted Holt Medallion, a two-time Carol Award winner, and has won the Inspirational Reader’s Choice Award three times. Her books have been on various bestseller lists, including CBD, CBA, ECPA, and Publishers Weekly. Beth and her husband are empty nesters enjoying country life in south central Texas. Visit her online at BethWiseman.com; Facebook: AuthorBethWiseman; Twitter: @BethWiseman; Instagram: @bethwisemanauthor.

With over a million copies sold, Kathleen Fuller is the author of several bestselling novels, including the Hearts of Middlefield novels, the Middlefield Family novels, the Amish of Birch Creek series, and the Amish Letters series as well as a middle-grade Amish series, the Mysteries of Middlefield. Visit her online at KathleenFuller.com; Instagram: kf_booksandhooks; Facebook: WriterKathleenFuller; Twitter: @TheKatJam.

Ruth Reid is a CBA and ECPA bestselling author of the Heaven on Earth, the Amish Wonders, and the Amish Mercies series. She’s a full-time pharmacist who lives in Florida with her husband and three children. When attending Ferris State University School of Pharmacy in Big Rapids, Michigan, she lived on the outskirts of an Amish community and had several occasions to visit the Amish farms. Her interest grew into love as she saw the beauty in living a simple life. Visit Ruth online at RuthReid.com; Facebook: Author-Ruth-Reid; Twitter: @AuthorRuthReid.

Tricia Goyeris a busy mom of ten, doting grandma, and wife to John. A USA Today bestselling author, Tricia has published seventy books and is a two-time Carol Award winner, as well as a Christy and ECPA Award Finalist. She won the Retailer’' Best Award in 2015 and has received starred reviews from Romantic Times and Publishers Weekly. She is also on the blogging team at TheBetterMom.com and other homeschooling and Christian sites. Tricia is the founder of Hope Pregnancy Ministries and currently leads a teen MOPS Group in Little Rock, Arkansas.