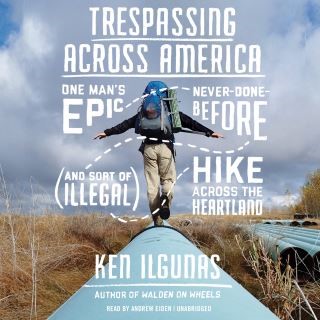 One Man's Epic, Never-Done-Before (and Sort of Illegal) Hike across the Heartland

Told with sincerity, humor, and wit, Trespassing across America is both a fascinating account of one man's remarkable journey along the Keystone XL pipeline and a meditation on climate change, the beauty of the natural world, and the extremes to which we can push ourselves-both physically and mentally.It started as a far-fetched idea-to hike the entire length of the proposed route of the Keystone XL pipeline. But in the months that followed, it grew into something more for Ken Ilgunas. It became an irresistible adventure-an opportunity to not only draw attention to global warming but to explore his personal limits. So in September 2012, he strapped on his backpack, stuck out his thumb on the interstate just north of Denver, and hitchhiked 1,500 miles to the Alberta tar sands. Once there, he turned around and began his 1,900-mile trek to the XL's endpoint on the Gulf Coast of Texas, a journey which he would complete entirely on foot, almost exclusively walking across private property.Both a travel memoir and a reflection on climate change, Trespassing across America is filled with colorful characters, harrowing physical trials, and strange encounters with the weather, terrain, and animals of America's plains. A tribute to the Great Plains and the people who live there, Ilgunas' memoir grapples with difficult questions about our place in the world: What is our personal responsibility as stewards of the land? As members of a rapidly warming planet? As mere individuals up against something as powerful as the fossil-fuel industry? Ultimately, Trespassing across America is a call to embrace the belief that a life lived not half-wild is a life only half-lived.

Ken Ilgunas was born in Hamilton, Ontario, and raised in Wheatfield, a small rural-suburban town in western New York where his family lives. At the moment, he's either tending a friend's garden in Stokes County, North Carolina, or traveling cross-country in his van.

Andrew Eiden is an actor and five-time winner of the AudioFile Earphones Award for his audio narrations. Hehas been acting since the age of four, working at regional theaters including La Mirada Theatre, the Glendale Center Theatre, and the Pasadena Playhouse. He has starred in dozens of national commercials, guest-spotted on numerous television shows, and has been a series regular on three programs: Discovery Channel's Outward Bound, Disney Channel's Movie Surfers, and most notably ABC's Complete Savages. Finding a true passion for audiobooks in 2010, Andrew has worked on nearly two hundred titles, over thirty of which he has lent his voice to.