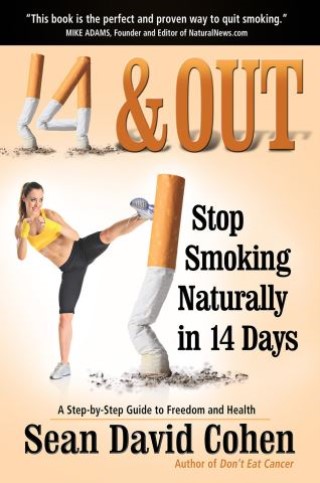 14 & Out is the all natural, easiest and most reliable way to stop smoking within 14 days! When you make a decision to quit smoking, you are making a decision to change everything about the way you feel, look, and interact with the world. You will look better, feel better, live better, contribute more, and you will shine. People will know you did something great, and you will love your new life as a non-smoker. No other stop-smoking program in the world is this thorough and reliable. In 60 minutes smokers learn all about chemicals in commercial cigarettes that are combined to keep them hooked, and how behavior modification and nutrition are their yellow brick road to good health and a permanent escape from the nicotine “hook.” Over 100,000 people have shared the trailer of the video download, and thousands in the author's classes—now the 14 & Out program is available in paperback. Based on the class taught by the author and inventor himself, the “Stop Smoking King” asks you: “How great would your life be without cigarettes?” Learn how to break free from the vicious cycle of cigarettes in less than 14 days and experience health freedom and all the benefits that come with ending the habit once and for all. Recommended by doctors and the Health Ranger, Mike Adams, Editor and Founder of NaturalNews.com. It’s time to get the ultimate secret to quitting. If you have the will to quit, 14 & Out is the way.

Sean David Cohen: Sean David Cohen is a contributing writer for NaturalNews.com, which gets a million hits a day—over 150 of his professional articles have been published, subjects ranging from chemicals in foods to natural remedies and also strategies for quitting the smoking addiction. On Natural News, Sean’s pen name is S.D. Wells, and his article series called “Health Basics” has become very popular, with social media shares in the tens of thousands. He has appeared on the Hampton Roads talk shows to present his unique 14 And Out – Stop Smoking Naturally strategies.  Cohen has written two novels and a book called Don’t Eat Cancer, which will be published by Koehler Books in 2014. Don't Eat Cancer reveals hundreds of chemicals agents in foods, drinks, and personal products. Sean Cohen has also written, directed and produced two independent films which have been entered into international film festivals. He appears on blog radio talk monthly to expose GMO (genetically modified organisms/food) and teaches a smoking cessation class, for free, in his hometown of Virginia Beach, Virginia, which is part of the Hampton Roads area, including Norfolk, VA. He has a Bachelor of Arts degree in Journalism with a focus on Mass Communication. He also has a Master’s degree in Education, also from the University of Georgia.