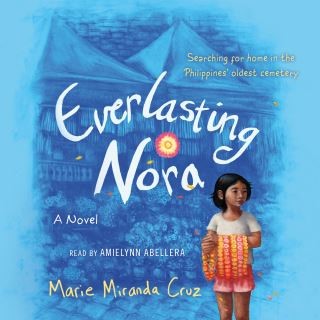 "If the middle grade Filipino American market had an audio representative, Abellera would be the reigning voice" — School Library Journal

This program includes a bonus conversation with the author.

An uplifting middle-grade debut about perseverance against all odds, Marie Miranda Cruz's debut Everlasting Nora follows the story of a young girl living in the real-life shanty town inside the Philippines’ North Manila Cemetery.

After a family tragedy results in the loss of both father and home, 12-year-old Nora lives with her mother in Manila’s North Cemetery, which is the largest shanty town of its kind in the Philippines today.

When her mother disappears mysteriously one day, Nora is left alone.

With help from her best friend Jojo and the support of his kindhearted grandmother, Nora embarks on a journey riddled with danger in order to find her mom. Along the way she also rediscovers the compassion of the human spirit, the resilience of her community, and everlasting hope in the most unexpected places.

“A story of friendship and unrelenting hope.”—Erin Entrada Kelly

Marie Miranda Cruz: MARIE MIRANDA CRUZ was born in the historic town of Cavite City, Philippines, a city established in the late 17th century of the Spanish Colonial period, and spent a large portion of her childhood and teenage years living around the country. Marie moved to the United States permanently after getting her degree in Biology and currently works as a medical technician. She always held a deep love for children's books and writing; Everlasting Nora is her first novel.Writer and scientist MARIE MIRANDA CRUZ grew up in the Philippines and her work reflects her multicultural roots, both in the country of her birth and in her adopted California. Everlasting Nora is her debut novel.