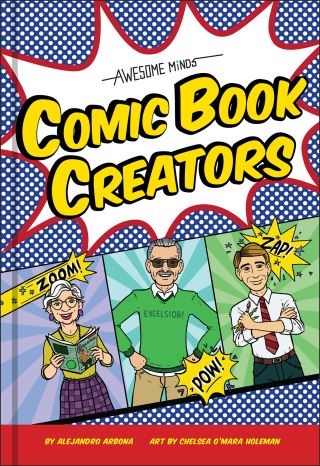 Did you know that Superman debuted in 1938 and is considered to have fueled the birth of the superhero craze? Or that Katsuhiro Otomo's Akira was instrumental in introducing manga to the world outside of Japan?

Comic books are now fully part of mainstream pop culture, and this engaging read introduces kids ages 8-12 to the pivotal creators of the world's most beloved comics, as well as the unknown names that have guided the industry to where it is today. From classic superhero tales like Spider-Man to epic fantasy adventures like Elfquest, comic books have inspired legions of devoted fans and accrue sales of over $1 billion annually. Awesome Minds: Comic Book Creators will walk kids through the important milestones in comic book history and the visionaries who helped develop some of the most iconic fictional characters today.

Alejandro Arbona:
Alejandro Arbona began his publishing career nearly fifteen years ago as an editor and writer at Wizard: The Magazine of Comics, Entertainment, and Pop Culture, and his comic book writing has appeared in the Eisner Award-winning anthology Love is Love (DC Comics/IDW Publishing) and the independent sci-fi anthology Fearless Future. Alejandro was an editor at Marvel Comics and Valiant Entertainment; he currently edits Black Magick and The Old Guard for Image Comics, and Ghost in the Shell: Global Neural Network for Penguin Random House and Kodansha. Alejandro is the author of Awesome Minds: Video Game Creators. He lives in New York City.

Chelsea O'Mara Holeman is a freelance illustrator located in the Shoals area of Alabama. She has done editorial illustrations for magazines like No’Ala, SET, and What’s Up? Annapolis, as well as numerous children’s and adult books and interactive e‑books from companies like Krullstone Publishing, Linxter, and Story Bayou. Chelsea works in a variety of different settings and mediums, expanding her work to include window murals, gaming apps, graphic novels, T‑shirt and poster designs, podcast artwork, illustrated maps, and abstract paintings. In her downtime she loves watching horror movies with her cats and drawing small illustrations that she hides around town for people to find.