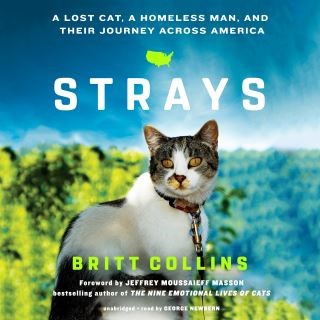 A Lost Cat, a Homeless Man, and Their Journey across America

For fans of A Street Cat Named Bob and Dewey: The Small-Town Library Cat Who Touched the World, Strays is a compelling true story of a man who rescues a stray, injured cat and how they save each other. Homeless, alcoholic, and depressed, Michael King lives in a UPS loading bay on the wrong side of the tracks in Portland, Oregon. One rainy night, he stumbles upon a hurt, starving, scruffy cat and takes her in. Nursing her back to health, he names her Tabor, and she becomes a bit of a celebrity in southeast Portland. When winter comes, they travel from Oregon to the beaches of California and to the high plains of Montana, surviving blizzards and bears, angry steers and rainstorms. Along the way, people are drawn to the spirited, beautiful cat and moved to help Michael, who cuts a striking figure with Tabor riding high on his backpack or walking on a leash. Tabor comforts Michael when he's down, giving Michael someone to love and care for, and inspiring him to get sober and to come to terms with his past family traumas and grief over the death of his life partner. As they make their way across the West Coast, the pair become inseparable, healing the scars of each other's troubled pasts. But when Michael takes Tabor to a veterinarian in Montana, he discovers that Tabor has an identification chip and an owner in Portland who has never given up hope of finding his beloved cat. Michael makes the difficult choice to return to Portland and reunite Tabor with her owner. Now Michael must create a new purpose in his life after Tabor.The authentic tale of an adventurous and charismatic cat and her compassionate human admirers, Strays proves the healing power of love and the profound bond between humans and animals.

Britt Collins is a British journalist and writes for London's Guardian, Sunday Times, and Independent, as well as Harper's Bazaar and Conde Nast Traveler. She has been a volunteer at sanctuaries around the world, from tending big cats and baboons in Namibia to wild horses in Nevada. She has raised hundreds of thousands of dollars for many international charities through her investigative stories of animal cruelty and, as an activist, has helped shut down controversial breeders of laboratory animals.

Jeffrey Moussaieff Masson is the author of twenty-five books, including the New York Times bestselling When Elephants Weep and Dogs Never Lie about Love, as well as The Pig Who Sang to the Moon, The Face on Your Plate, and The Assault on Truth. He was professor of Sanskrit at the University of Toronto, where he also trained as a Freudian analyst. An American, he lives in New Zealand with his family and companion animals.

George Newbern is an Earphones Award-winning narrator and a television and film actor best known for his roles as Brian MacKenzie in Father of the Bride and Father of the Bride Part II, as well as Danny in Friends. As a voice actor, he is notable for his role as Superman on the Cartoon Newtork series Static Shock, Justice League, and Justice League Unlimited. He has guest starred on many television series, including Scandal, The Mentalist, Private Practice, CSI: Miami, and Numb3rs. He holds a BA in theater arts from Northwestern University.