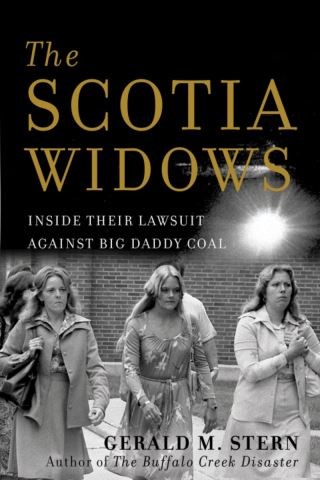 Inside Their Lawsuit Against Big Daddy Coal

On March 9, 1976, a violent explosion, fueled by high concentrations of methane gas and coal dust, ripped through the Scotia mine in the heart of Eastern Kentucky coal country. The blast killed fifteen miners who were working nearly three and a half miles underground; two days later, a second explosion took the lives of eleven rescue workers. For the miners’ surviving family members, the loss of their husbands, fathers, and sons was only the beginning of their nightmare.

In The Scotia Widows, Gerald M. Stern, the groundbreaking litigator and acclaimed author of The Buffalo Creek Disaster, recounts the epic four-year legal struggle waged by the widows in the aftermath of the disaster. Stern shares a story of loss, scandal, and perseverance–and the plaintiffs’ fight for justice against the titanic forces of “Big Daddy Coal.”

Confronted at nearly every turn by a hostile judge and the scorched-earth defense of the Scotia mine’s owners, family members also withstood the opprobrium of some of their neighbors, most of whom relied on coal mining for their livelihoods. Meanwhile, Stern, representing the widows of the disaster on contingency, amassed huge bills and encountered a litany of formidable obstacles. The Eastern Kentucky trial judge withheld disclosure of his own personal financial interest in coal mining, and a popular pro-coal former Kentucky governor served as the lead defense counsel. The judge also suppressed as evidence the federal mine study that pointed to numerous safety violations at the Scotia mine: In a rush to produce more coal, necessary ventilation had been short-circuited, miners had not been trained in the use of self-rescue equipment, and ventilation inspections had not been made. Moreover, Scotia did not even have a trained rescue team. Ultimately, the Scotia widows’ ordeal helped to inspire the Federal Mine Safety and Health Act of 1977, which changed safety regulations for coal mines throughout the country.

The Scotia Widows portrays in gripping detail young women deciding to pursue a landmark legal campaign against powerful corporate interests and the judge who protected them. It is a critically important and timeless story of ordinary people who took a stand and refused to give up hope for justice.

Praise for The Scotia Widows:

“This is a very scary story, a guided tour of the grinding cogs and spinning wheels inside the machinery of justice. Gerald Stern’s compassionate account of the ordeal of the Scotia widows shows you how horribly out of kilter it can all get when greed and self-interest are at the controls. Only with luck and the expertise of Stern does justice emerge in the end, a bit tarnished but still intact.”
–Jonathan Harr, author of A Civil Action

Gerald Stern: Gerald M. Stern was a founding partner of the Washington, D.C., law firm Rogovin, Stern & Huge. Prior to that, he was a partner with Arnold & Porter for eleven years, where he was the lead counsel for the survivors of the Buffalo Creek disaster. Before joining Arnold & Porter, he was a trial attorney with the Civil Rights Division of the United States Department of Justice, trying voting discrimination cases in the South. He wrote about those experiences in chapters of two books, Southern Justice and Outside the Law. He is also the author of The Buffalo Creek Disaster and has served as general counsel of Occidental Petroleum Corporation and as special counsel to the United States Department of Justice. Presently, he is a legal consultant and lives in Washington, D.C.