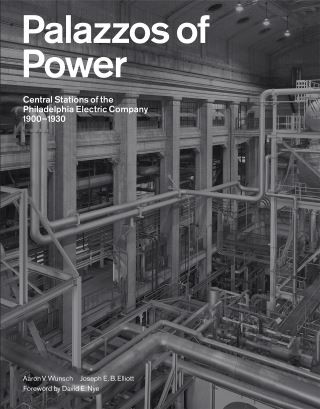 "If it isn't Electric, it isn't Modern." Such was the slogan of the Philadelphia Electric Company, developer of an unprecedented network of massive metropolitan power stations servicing greater Philadelphia at the turn of the twentieth century. These once-brilliant sentinels of civic utility and activity were designed to convey "solidity and immensity" in an age of deep public skepticism. They now stand vacant and decaying, a "blight" in the eyes of city planners and a beacon to urban explorers.

The first book on the buildings and machines that made possible the electrification of the United States, Palazzos of Power offers a visual and analytical exploration of architecture, technology, place, loss, and reuse. With a foreword by David Nye, this collection of Joseph Elliott's beautiful large-format photographs reveal the urban landscape, monumental spaces, giant machinery, and intricate controls that made up the central station. Aaron Wunsch's essay provides historical context on the social and political climate.

Aaron V. Wunsch: Aaron V. Wunsch is assistant professor in the University of Pennsylvania's Graduate Program in Historic Preservation. He helped document Philadelphia Electric's architecture and a diverse array of buildings and landscapes in the Greater Philadelphia area during his employment at the Historic American Buildings Survey.Joseph E. B. Elliott is Professor of Art at Muhlenberg College, and his photographs have appeared in Smithsonian, Wired, and Metropolis magazines. His book, The Steel: Images of the Bethlehem Steel Plant 1989–1995, was published by Columbia College Chicago Press in 2013.