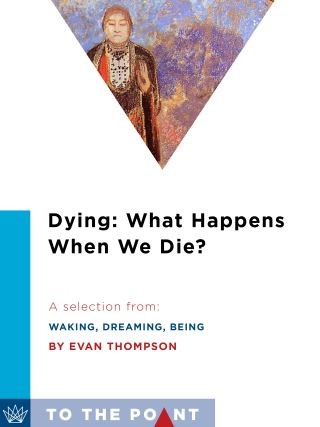 Dying: What Happens When We Die?

A Selection from Waking, Dreaming, Being: Self and Consciousness in Neuroscience, Meditation, and Philosophy

In the ancient Indian epic, Mahabharata, the Lord of Death asks, "What is the most wondrous thing in the world?", and his son answers, "It is that all around us people can be dying and we don't believe it can happen to us." This refusal to face the inevitability of death is especially prevalent in modern Western societies. We look to science to tell us how things are but biomedicine and neuroscience divest death of any personal significance by presenting it as just the breakdown of the body and the cessation of consciousness. The Tibetan Buddhist perspective stands in sharp contrast to this modern scientific notion of death. This tradition conceives dying not as the mere termination of living processes within the body, but as a rite of passage and transformation of consciousness. Physical death, in this tradition, initiates a transition from one of the six bardos ("in-between states") of consciousness to an opportunity for total enlightenment. In Dying: What Happens When We Die?, Evan Thompson establishes a middle ground between the depersonalized, scientific account of death and the highly ritualized notion of death found in Tibetan Buddhism. Thompson's depiction of death and dying offers an insightful neurobiological analysis while also delving into the phenomenology of death, examining the psychological and spiritual effects of dying on human consciousness. In a trenchant critique of the near-death experience literature, he shows that these experiences do not provide evidence for the continuation of consciousness after death, but also that they must be understood phenomenologically and not in purely neuroscience terms. We must learn to tolerate the "ultimate ungraspability of death" by bearing witness to dying and death instead of turning away from them. We can learn to face the experience of dying through meditative practice, and to view the final moments of life not as a frightening inevitability to be shunned or ignored, but as a deeply personal experience to be accepted and even embraced.