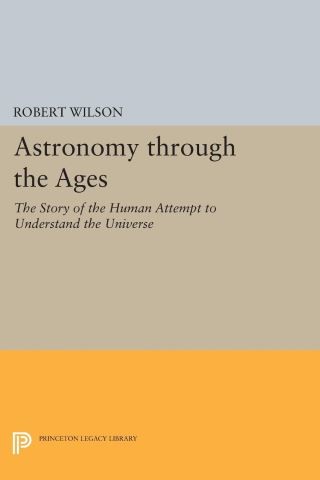 Astronomy through the Ages

The Story of the Human Attempt to Understand the Universe

When astronomers today look up at the night sky they picture a spectacular and infinite universe--full of pulsars, quasars, and black holes and ruled by arcane laws of space and time. Once, ancient astronomers looked up and saw only points of light tracing calm movements across the heavens. But they too were moved to wonder about the meaning of what they saw. In Astronomy through the Ages, Sir Robert Wilson tells the story of how our understanding of the universe has evolved through history--of how the sedate and stable star field of ancient times has been replaced by the vast and explosive universe we know today. Wilson, one of the most distinguished astronomers of the twentieth century, begins by tracing the astronomical studies of the ancient Babylonians, Egyptians, and Greeks and reviews important early contributions from India, China, and the Islamic world. He explains the development of the sun-centered model of the universe in Renaissance Europe. He then tells how the development of the telescope, photography, and spectroscopy pushed back the limits of the observable universe and eventually brought astronomy into the twentieth century. Finally, he describes the rapid advances in radio and space astronomy and other methods over the past fifty years that have ushered in a new "golden age" of astronomy. These advances have not only allowed observation of deep space but also enabled scientists to unlock the secrets of the universe itself from its origin to its possible fate. Wilson himself has played an important role in these discoveries as the developer of one of the most successful astronomical satellites ever launched, the International Ultraviolet Explorer. While focusing on the human side of astronomical discovery, Wilson also provides readers with a basic understanding of difficult concepts, explaining relativity and quantum mechanics without using technical language or mathematics. Remarkable in its scope and clarity,Astronomy through the Ages provides an accessible view of historical discoveries and modern advances and shows why excitement about astronomy is even greater today than when Galileo first gazed in wonder at the rings of Saturn.

The Princeton Legacy Library uses the latest print-on-demand technology to again make available previously out-of-print books from the distinguished backlist of Princeton University Press. These editions preserve the original texts of these important books while presenting them in durable paperback and hardcover editions. The goal of the Princeton Legacy Library is to vastly increase access to the rich scholarly heritage found in the thousands of books published by Princeton University Press since its founding in 1905.