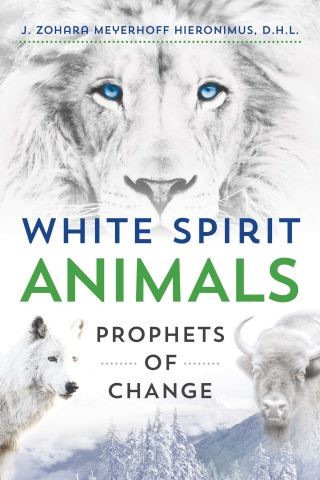 Explores the powers and wisdom of sacred White Spirit Animals

• Reveals how White Spirit Animals are calling humanity to restore balance, respect, reverence, and honor to protect our animal kin, ourselves, and the earth

Beautiful rarities of nature, all-white animals are held sacred by many indigenous cultures and offer deep wisdom to all who will listen. In addition to the White Buffalo, there are other revered white animals, such as the White Wolf, White Lion, White Elephant, and White Bear. Each of these White Spirit Animals belongs to a species at the apex of their ecosystem, meaning the environment in which they live will unravel without them. Speaking through ancient and modern prophecy and the many humans who communicate with them, these White Spirit Animals are urgently calling to humanity to restore balance and protect our animal kin, ourselves, and the earth.

Combining sacred elder lore, science, and her own telepathic dreams, Zohara Hieronimus looks at the special role played by White Spirit Animals in spiritual traditions and prophecy around the globe, where they are seen as guardians of animal wisdom, each with a special purpose and gift. She reveals how they have collaborated with humanity since the last ice age, inspiring spiritual practices and conferring shamanistic powers, and are considered the stewards of the great spiritual transformations that occur during transitional times. Sharing the waking vision of White Spirit Animals that called her to write this book, and their message of CPR for the earth--conservation, preservation, and restoration--she explains how to use shamanic dreaming and trans-species telepathy to communicate with these great spiritual teachers. Exploring each one of the major White Spirit Animals--White Buffalo, White Lion, White Elephant, White Wolf, and White Spirit Bear--and the cultures in which they are honored, the author shows, for example, how the White Buffalo is called a harbinger of peace and abundance by many Native American tribes and the White Bear, the great earth healer, teaches us about nurturance and patience.

As a bridge between the spiritual and physical worlds, between humans and animals, White Spirit Animals are calling us to open our hearts to the wild, to the sacredness of the wind, the water, the earth, and dream a new world into being to heal our own personal and collective wounds and restore the earth to balance.

J. Zohara Meyerhoff Hieronimus: J. Zohara Meyerhoff Hieronimus, D.H.L., author of The Sanctuary of the Divine Presence and Kabbalistic Teachings of the Female Prophets, is an award-winning radio broadcaster, social justice and environmental activist, and passionate organic gardener. She founded the Ruscombe Mansion Community Health Center in Baltimore in 1984 and hosted the daily regional radio program The Zoh Show from 1992 to 2002 and the national radio program Future Talk from 2002 to 2008. She cohosts 21st Century Radio with her husband, Robert Hieronimus, and lives in Owings Mills, Maryland.