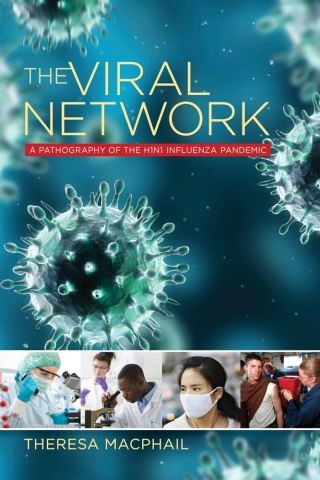 A Pathography of the H1N1 Influenza Pandemic

In The Viral Network, Theresa MacPhail examines our collective fascination with and fear of viruses through the lens of the 2009 H1N1 pandemic. In April 2009, a novel strain of H1N1 influenza virus resulting from a combination of bird, swine, and human flu viruses emerged in Veracruz, Mexico. The Director-General of the World Health Organization (WHO) announced an official end to the pandemic in August 2010. Experts agree that the global death toll reached 284,500. The public health response to the pandemic was complicated by the simultaneous economic crisis and by the public scrutiny of official response in an atmosphere of widespread connectivity. MacPhail follows the H1N1 influenza virus's trajectory through time and space in order to construct a three-dimensional picture of what happens when global public health comes down with a case of the flu.The Viral Network affords a rare look inside the U.S. Centers for Disease Control, as well as Hong Kong’s virology labs and Centre for Health Protection, during a pandemic. MacPhail looks at the day-to-day practices of virologists and epidemiologists to ask questions about the production of scientific knowledge, the construction of expertise, disease narratives, and the different "cultures" of public health in the United States, Europe, Hong Kong, and China. The chapters of the book move from the micro to the macro, from Hong Kong to Atlanta, from the lab to the WHO, from the pandemic past in 1918 to the future. The various historical, scientific, and cultural narratives about flu recounted in this book show how biological genes and cultural memes become interwoven in the stories we tell during a pandemic. Ultimately, MacPhail argues that the institution of global public health is as viral as the viruses it tracks, studies, and helps to contain or eradicate. The "global" is itself viral in nature.