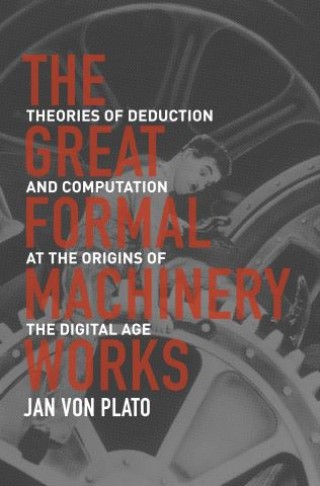 The information age owes its existence to a little-known but crucial development, the theoretical study of logic and the foundations of mathematics. The Great Formal Machinery Works draws on original sources and rare archival materials to trace the history of the theories of deduction and computation that laid the logical foundations for the digital revolution.

Jan von Plato examines the contributions of figures such as Aristotle; the nineteenth-century German polymath Hermann Grassmann; George Boole, whose Boolean logic would prove essential to programming languages and computing; Ernst Schröder, best known for his work on algebraic logic; and Giuseppe Peano, cofounder of mathematical logic. Von Plato shows how the idea of a formal proof in mathematics emerged gradually in the second half of the nineteenth century, hand in hand with the notion of a formal process of computation. A turning point was reached by 1930, when Kurt Gödel conceived his celebrated incompleteness theorems. They were an enormous boost to the study of formal languages and computability, which were brought to perfection by the end of the 1930s with precise theories of formal languages and formal deduction and parallel theories of algorithmic computability. Von Plato describes how the first theoretical ideas of a computer soon emerged in the work of Alan Turing in 1936 and John von Neumann some years later.

Shedding new light on this crucial chapter in the history of science, The Great Formal Machinery Works is essential reading for students and researchers in logic, mathematics, and computer science.

Jan von Plato: Jan von Plato is professor of philosophy at the University of Helsinki. His books include Elements of Logical Reasoning and Structural Proof Theory.