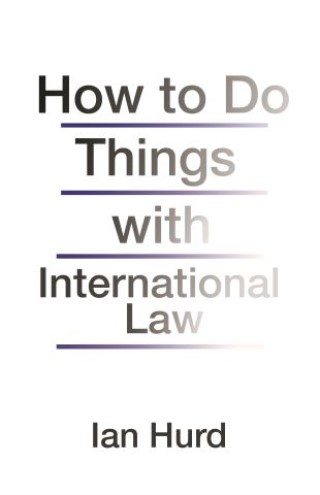 How to Do Things with International Law

A provocative reassessment of the rule of law in world politics

Conventionally understood as a set of limits on state behavior, the “rule of law” in world politics is widely assumed to serve as a progressive contribution to a just, stable, and predictable world. In How to Do Things with International Law, Ian Hurd challenges this received wisdom. Bringing the study of law and legality together with power, politics, and legitimation, he illustrates the complex politics of the international rule of law.

Hurd draws on a series of timely case studies involving recent legal arguments over war, torture, and drones to demonstrate that international law not only domesticates state power but also serves as a permissive and even empowering source of legitimation for state action—including violence and torture. Rather than a civilizing force that holds the promise of universal peace, international law is a deeply politicized set of practices driven by the pursuit of particular interests and desires. The disputes so common in world politics over what law permits and what it forbids are, therefore, fights over the legitimating effect of legality.

A reconsideration of the rule of law in world politics and its relationship to state power, How to Do Things with International Law examines how and why governments use and manipulate international law in foreign policy.

Ian Hurd: Ian Hurd is associate professor of political science at Northwestern University. He is the author of After Anarchy (Princeton) and International Organizations.