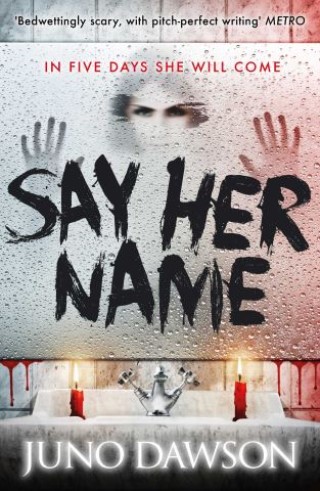 Drip...drip...drip... In five days, she will come... Roberta 'Bobbie' Rowe is not the kind of person who believes in ghosts. A Halloween dare at her ridiculously spooky boarding school is no big deal, especially when her best friend Naya and cute local boy Caine agree to join in too. They are ordered to summon the legendary ghost of Bloody Mary: say her name five times in front of a candlelit mirror, and she shall appear... But, surprise surprise, nothing happens. Or does it? Next morning, Bobbie finds a message on her bathroom mirror - five days - but what does it mean? And who left it there? Things get increasingly weird and more terrifying for Bobbie and Naya, until it becomes all too clear that Bloody Mary was indeed called from the afterlife that night, and she is definitely not a friendly ghost. Bobbie, Naya and Caine are now in a race against time before their five days are up and Mary comes for them, as she has come for countless others before... A truly spine-chilling yet witty horror from shortlisted 'Queen of Teen' author James Dawson.

Juno Dawson: Queen of Teen 2014 Juno Dawson is the multi award-winning author of dark teen thrillers Hollow Pike, Cruel Summer, Say Her Name and Under My Skin, written under the name James Dawson. In 2015, she released her first contemporary romance, All ofthe Above. Margot and Me was published in 2017. Her first non-fiction book, Being a Boy, tackled puberty, sex and relationships, and a follow-up for young LGBT people, ThisBook Is Gay, came out in 2014, and a guide to mental health for young people, Mind Your Head, followed in2016. Juno is a regular contributor to Attitude, GT, Glamour and the Guardian and has contributed to news items concerning sexuality, identity, literature and education on BBC Woman's Hour, Front Row, This Morning and Newsnight.She is a School Role Model for the charity Stonewall, and also works with the charity First Story to visit schools serving low-income communities. Juno's titles have received rave reviews and her books have been translated into more than ten languages. Say Her Name was shortlisted for the YA Book Prize 2015, and Margot and Me was shortlisted for the Lancashire Libraries Book of the Year 2018. In 2018 she was shortlisted for the Women in Creative Industries award. In 2015, Juno announced her transition to become a woman, having lived thus far as the male author James Dawson. She writes fulltime and lives in Brighton. Follow Juno on Twitter: @junodawson or on Facebook at Juno Dawson Books.