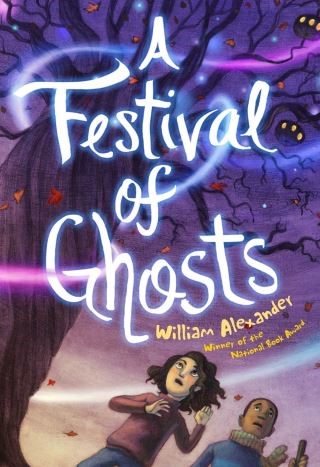 A Festival of Ghosts

National Book Award winner William Alexander conjures up a spooky adventure full of excitement in this entertaining sequel to A Properly Unhaunted Place, which was a New York Times Editors’ Choice.

Rosa Diaz has her hands full of ghosts. She saved the town of Ingot by unleashing all the ghosts who were previously banished. Now, like the rest of the world, Ingot is filled with spirits and poltergeists. But unlike the rest of the world, the town’s living residents have no idea how to cope, and some of the ghosts are holding century-old grudges.

When something supernatural starts stealing kids’ voices at her school, it’s up to Rosa to figure out who or what is behind the voice-snatching. It doesn’t help that some of her classmates are still angry with her for releasing the ghosts. Or that Rosa begins to suspect that she may be haunted herself.

Meanwhile, her best friend Jasper is dealing with what remains of the Renaissance Festival, the town’s pride and joy. Ghosts from the town are now battling it out with ghosts from the festival, and the grounds are closed to all. But is it possible to appease everyone?

William Alexander: William Alexander won the National Book Award for his debut novel, Goblin Secrets, and won the Earphones Award for his narration of the audiobook. His other novels include A Festival of Ghosts, A Properly Unhaunted Place, Ghoulish Song, Nomad, and Ambassador. William studied theater and folklore at Oberlin College, English at the University of Vermont, and creative writing at the Clarion workshop. He teaches in the Vermont College of Fine Arts MFA program in Writing for Children and Young Adults. Like the protagonist of Nomad and Ambassador, William is the son of a Latino immigrant to the US. Visit him online at WillAlex.net and GoblinSecrets.com, and on Twitter via @WillieAlex.Kelly Murphy is a New York Times bestselling author-illustrator and recipient of the E.B. White Award. She teaches illustration at her alma mater, the Rhode Island School of Design. Kelly currently lives in her native New England, surrounded by the flora and fauna featured in Together We Grow. Find out more at KelMurphy.com.