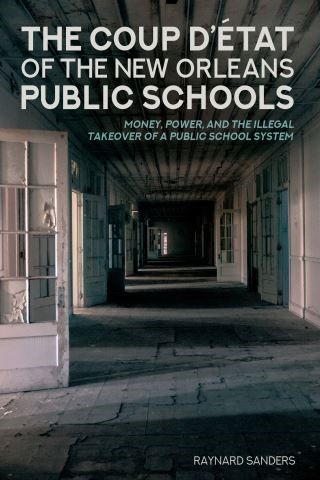 The Coup Détat of the New Orleans Public Schools

Money, Power, and the Illegal Takeover of a Public School System

The Coup D’état of the New Orleans Public Schools explores and criticizes the contemporary educational reforms of the New Orleans public school system. The New Orleans education reforms implemented after Hurricane Katrina, using the corporate model approach, have been an academic failure with charter operators making millions of dollars while reestablishing a segregated school system based on race and class—all in the name of school reform. Despite the claims of unprecedented academic success the educational reforms have been a dismal failure academically and operationally, and have resurrected equity and access issues. Equally as disturbing the reforms firmly have re-established a tiered public school system that segregates students by race and class. The Coup D’état of the New Orleans Public Schools puts the corporate education reform movement in its proper context, which is to create a new twenty-first century model for turning around urban public school districts in the United States. This book reveals what really happened pre- and post-Hurricane Katrina that contributed to the state takeover of public schools in New Orleans. This story is told through the eyes of parents, students, activists, political leaders, and Orleans Parish School Board members and employees who have been largely ignored. It also includes an analysis of the author’s personal experience of almost forty years in New Orleans public schools as a teacher, principal, and college professor.