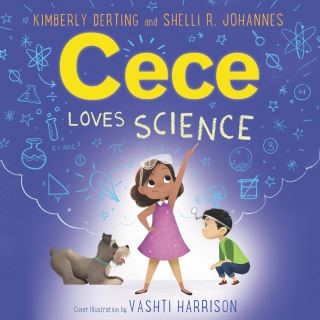 Cece loves science! In this STEM-themed book, Cece asks one of life’s most pressing questions: Do dogs eat vegetables? Cece and her best friend, Isaac, head to the lab to find out.

This picture book is perfect for fans of Ada Twist, Scientist, and anyone who enjoys asking questions.

Cece’s parents say she was born curious. She asks: Why? How? What if? When her teacher, Ms. Curie, assigns a science project, Cece knows just what to ask—do dogs eat vegetables? She teams up with her best friend, Isaac, and her dog, Einstein, to discover the answer. They investigate, research, collect data, and analyze, using Einstein as their case study. Their final conclusion is surprising, and a lot of fun!

Cece Loves Science is just right for fans of Rosie Revere, Engineer and What Do You Do with an Idea?, and for anyone who loves to learn.

Kimberly Derting is the author of the Cece Loves Science series, the Body Finder series, the Pledge trilogy, and the Taking series. She lives in the Pacific Northwest, where the gloomy weather is ideal for writing anything dark and creepy. Her three beautiful (and often mouthy) children serve as an endless source of inspiration and frequently find things they say buried in the pages of their mother’s books. You can visit her online at www.kimberlyderting.com.

Shelli R. Johannes never warmed up to creepy crawly bugs, but she always loved zoology and biology. In fact, she can often be found on highways and country roads saving strays and other jaywalking critters, or volunteering with animal conservations groups like The Atlanta Zoo, The Dolphin Project, and animal rescue centers. Unfortunately, she learned early on that chemistry (a.k.a. cooking) was not her favorite science, often resulting in odd reactions and minor explosions. She lives in Atlanta with her husband, two kids, one bird, one fish, and two crazy-haired Doodles who, just like Einstein, all who seem to love fruit and dessert, but loathe veggies.