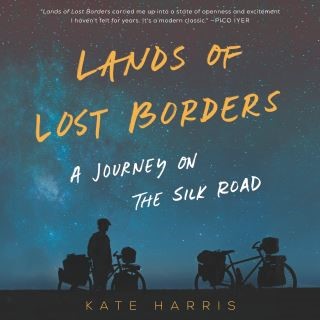 A Journey on the Silk Road

Lands of Lost Borders carried me up into a state of openness and excitement I haven’t felt for years. It’s a modern classic." —Pico Iyer

A brilliant, fierce writer makes her debut with this enthralling travelogue and memoir of her journey by bicycle along the Silk Road—an illuminating and thought-provoking fusion of The Places in Between, Lab Girl, and Wild that dares us to challenge the limits we place on ourselves and the natural world.

As a teenager, Kate Harris realized that the career she craved—to be an explorer, equal parts swashbuckler and metaphysician—had gone extinct. From what she could tell of the world from small-town Ontario, the likes of Marco Polo and Magellan had mapped the whole earth; there was nothing left to be discovered. Looking beyond this planet, she decided to become a scientist and go to Mars.

In between studying at Oxford and MIT, Harris set off by bicycle down the fabled Silk Road with her childhood friend Mel. Pedaling mile upon mile in some of the remotest places on earth, she realized that an explorer, in any day and age, is the kind of person who refuses to live between the lines. Forget charting maps, naming peaks: what she yearned for was the feeling of soaring completely out of bounds. The farther she traveled, the closer she came to a world as wild as she felt within.

Lands of Lost Borders is the chronicle of Harris’s odyssey and an exploration of the importance of breaking the boundaries we set ourselves; an examination of the stories borders tell, and the restrictions they place on nature and humanity; and a meditation on the existential need to explore—the essential longing to discover what in the universe we are doing here.

Like Rebecca Solnit and Pico Iyer, Kate Harris offers a travel account at once exuberant and reflective, wry and rapturous. Lands of Lost Borders explores the nature of limits and the wildness of the self that can never fully be mapped. Weaving adventure and philosophy with the history of science and exploration, Lands of Lost Borders celebrates our connection as humans to the natural world, and ultimately to each other—a belonging that transcends any fences or stories that may divide us.

Kate Harris is a writer and adventurer with a knack for getting lost. Named one of Canada's top modern-day explorers, her award-winning nature and travel writing has featured in The Walrus, Canadian Geographic Travel, Sidetracked and The Georgia Review, and cited in Best American Essays and Best American Travel Writing. In 2019, she was awarded the RBC Taylor Prize, one of Canada's most esteemed literature awards. She has degrees in science from MIT and the University of North Carolina at Chapel Hill, and in the history of science from Oxford, where she studied as a Rhodes scholar. When she isn't away on expeditions, or reporting on UN environmental negotiations for the International Institute for Sustainable Development, Harris lives off-grid in a log cabin on the border of the Yukon, British Columbia and Alaska. This is her first book.