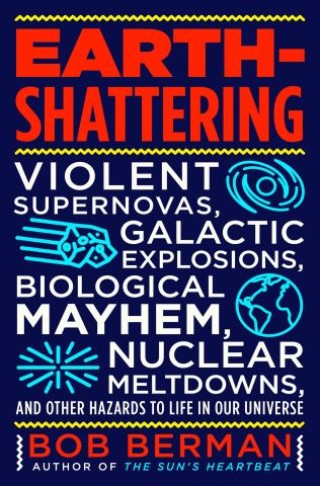 Violent Supernovas, Galactic Explosions, Biological Mayhem, Nuclear Meltdowns, and Other Hazards to Life in Our Universe

A heart-pumping exploration of the biggest explosions in history, from the Big Bang to mysterious activity on Earth and everything in between

The overwhelming majority of celestial space is inactive and will remain forever unruffled. Similarly, more than 90 percent of the universe's 70 billion trillion suns had non-attention-getting births and are burning through their nuclear fuel in steady, predictable fashion. But when cosmic violence does unfold, it changes the very fabric of the universe, with mega-explosions and ripple effects that reach the near limits of human comprehension. From colliding galaxies to solar storms, and gamma ray bursts to space-and-time-warping upheavals, these moments are rare yet powerful, often unseen but consequentially felt.
Likewise, here on Earth, existence as we know it is fragile, always vulnerable to hazards both natural and manufactured. As we've learned from textbooks and witnessed in Hollywood blockbusters, existential threats such as biological disasters, asteroid impacts, and climate upheavals have the all-too-real power to instantaneously transform our routine-centered lives into total chaos, or much worse. While we might be helpless to stop these catastrophes-whether they originate on our own planet or in the farthest reaches of space-the science behind such cataclysmic forces is as fascinating as their results can be devastating.
In Earth-Shattering, astronomy writer Bob Berman guides us through an epic, all-inclusive investigation into these instances of violence both mammoth and microscopic. From the sudden creation of dazzling "new stars" to the furiously explosive birth of our moon, from the uncomfortable truth about ultra-high-energy cosmic rays bombarding us to the incredible ways in which humanity has harnessed cataclysmic energy for its gain, Berman masterfully synthesizes some of our worst fears into an astonishing portrait of the universe that promises to transform the way we look at the world(s) around us.
In the spirit of Neil deGrasse Tyson and Carlo Rovelli, what emerges is a rollicking, profound, and even humbling exploration of all the things that can go bump in the night.