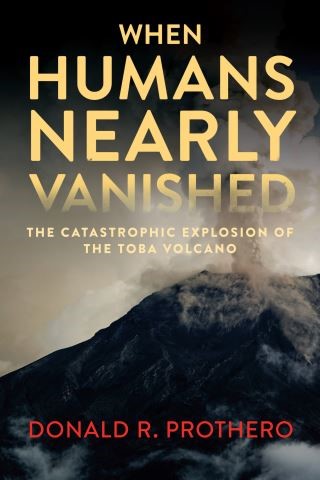 The Catastrophic Explosion of the Toba Volcano

Some 73,000 years ago, the huge dome of Mount Toba, in today's Sumatra, Indonesia, began to rumble. A deep vibration shook the entire island. Jets of steam and ash emanated from the summit, followed by an explosion louder than any sound heard by Homo sapiens since our species evolved on Earth. The eruption of the Toba supervolcano released the energy of a million tons of explosives; seven hundred cubic miles of magma spewed outward in an explosion forty times larger than the largest hydrogen bomb and more than a thousand times as powerful as the Krakatau eruption in 1883. So much ash and debris was injected into the stratosphere that it partially blocked the sun's radiation and caused global temperatures to drop by five to nine degrees. It took a full decade for Earth to recover to its pre-eruption temperatures.

When Humans Nearly Vanished presents the controversial argument that the Toba catastrophe nearly wiped out the human race, leaving only about a thousand to ten thousand breeding pairs of humans worldwide. Human genes today show evidence of a "genetic bottleneck," an effect seen when a population of organisms becomes so small that their genetic diversity is greatly reduced. This group of survivors could be the ancestors of all humans alive today. Donald R. Prothero explores the geological and biological evidence supporting the Toba bottleneck theory; reveals how the explosion itself was discovered; and offers insight into how the world changed afterward and what might happen if such an eruption occurred today. Prothero's riveting account of this calamitous supervolcanic explosion is not to be missed.

Donald R. Prothero: DONALD R. PROTHERO specializes in physics, planetary sciences, astronomy, earth sciences, and vertebrate paleontology. He taught for 35 years at the college level at Columbia, Knox, Pierce, and Vassar colleges, most recently as professor of geology at Occidental College and as lecturer in geobiology at the California Institute of Technology. He has authored or edited more than 300 scientific papers and 30 books, including Giants of the Lost World: Dinosaurs and Other Extinct Monsters of South America.