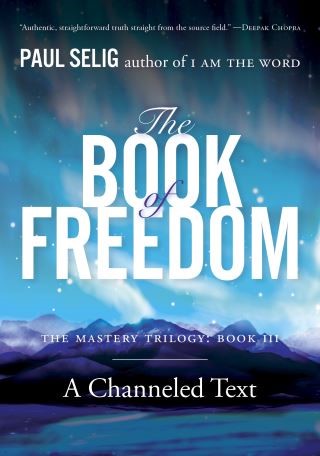 The Book of Freedom

The third work in channeler Paul Selig's acclaimed Mastery Trilogy guides readers to the knowledge of their true selves.

"The crown jewel of the mastery trilogy--the most important spiritual work of our time."--Aubrey Marcus, New York Times bestselling author of Own the Day, Own Your Life, founder and CEO of Onnit

The channeled literature of Paul Selig--who receives clairaudient dictation from unseen intellects called the Guides--has quickly become the most important and celebrated expression of channeling since A Course In Miracles rose to prominence in the 1970s.

Selig's previous trilogy of channeled wisdom--I Am the Word, The Book of Love and Creation, and The Book of Knowing and Worth--won a large following around the world for its depth, intimacy, and psychological insight. The first two books of his new Mastery Trilogy, The Book of Mastery and The Book of Truth, likewise attained popularity and praise. Now, Selig continues the "Teachings of Mastery" with the widely anticipated third volume in the series: The Book of Freedom, which shows readers how to find full expression as the Divine Self through surrender and acquiescence to the true nature of their being.

Paul Selig: Born in New York City, Paul Selig attended New York University and received his master's degree from Yale. A spiritual experience in 1987 left him clairvoyant. Selig is considered one of the foremost contributors to the field of channeled literature working today. He offers channeled workshops internationally and teaches regularly at the Esalen Institute. Also a noted educator, he served on the faculty of NYU for over 25 years. He is the former director of the MFA in Creative Writing Program at Goddard College and now serves on the college’s Board of Trustees. He lives in New York City where he maintains a private practice as an intuitive. Information on public workshops, online seminars and private readings can be found at www.paulselig.com.