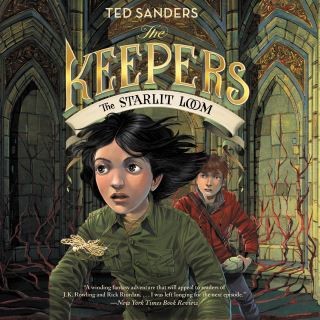 The Keepers #4: The Starlit Loom

For centuries, the Keepers and the Wardens have been guarding the mysterious Mothergates, a source of incredible power. But now the Mothergates are dying, and Horace and his fellow Keepers know that the weakened gates may unleash a dangerous force that will consume the world—and destroy everyone in it.

While their enemies are willing to take this careless risk, Horace and his friends are prepared to sacrifice themselves for the preservation of the world. With their strongholds destroyed and many of their friends captured, the Keepers’ chance of succeeding hangs by a thread.

But all hope is not lost, as a mysterious talisman of power is discovered. It may hold the key to saving the universe . . . if they can unlock its secret in time.

This fourth and final book in Ted Sanders’s gripping Keepers series brings Horace and Chloe’s story to a heart-pounding conclusion, where friendships are tested, dangers are faced, and the ultimate sacrifice must be made.

Ted Sanders is the author of the short-story collection No Animals We Could Name, winner of the 2011 Bakeless Prize for fiction. His stories and essays have appeared in publications such as the Georgia Review, the Gettysburg Review, and The PEN/O. Henry Prize Stories anthology. A recipient of a 2012 National Endowment for the Arts Literature Fellowship, he lives with his family in Urbana, Illinois, and teaches at the University of Illinois at Urbana-Champaign. The Keepers is his first series for younger readers. You can visit him online at www.tedsanders.net.