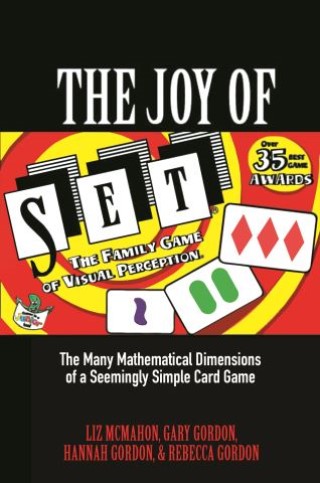 The Joy of SET

The Many Mathematical Dimensions of a Seemingly Simple Card Game

A mathematical exploration of the popular card game SET

Have you ever played the addictive card game SET? Have you ever wondered about the connections between games and mathematics? If the answer to either question is "yes," then The Joy of SET is the book for you! The Joy of SET takes readers on a fascinating journey into this seemingly simple card game and reveals its surprisingly deep and diverse mathematical dimensions. Absolutely no mathematical background is necessary to enjoy this book—all you need is a sense of curiosity and adventure!

Originally invented in 1974 by Marsha Falco and officially released in 1991, SET has gained a widespread, loyal following. SET's eighty-one cards consist of one, two, or three symbols of different shapes (diamond, oval, squiggle), shadings (solid, striped, open), and colors (green, purple, red). In order to win, players must identify “sets” of three cards for which each characteristic is the same—or different—on all the cards. SET’s strategic and unique design opens connections to a plethora of mathematical disciplines, including geometry, modular arithmetic, combinatorics, probability, linear algebra, and computer simulations. The Joy of SET looks at these areas as well as avenues for further mathematical exploration. As the authors show, the relationship between SET and mathematics runs in both directions—playing this game has generated new mathematics, and the math has led to new questions about the game itself.

The first book devoted to the mathematics of one of today’s most popular card games, The Joy of SET will entertain and enlighten the game enthusiast in all of us.