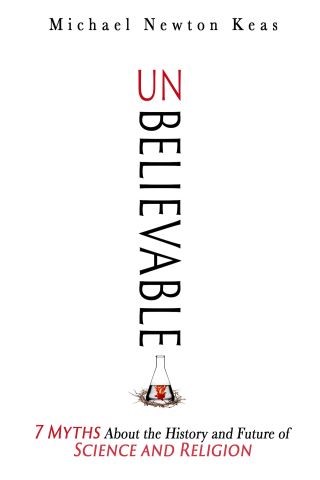 7 Myths About the History and Future of Science and Religion

Unbelievable explodes seven of the most popular and pernicious myths about science and religion. Michael Newton Keas, a historian of science, lays out the facts to show how far the conventional wisdom departs from reality. He also shows how these myths have proliferated over the past four centuries and exert so much influence today, infiltrating science textbooks and popular culture.

· Why the “Dark Ages” never happened
· Why we didn’t need Christopher Columbus to prove the earth was round
· Why Copernicus would be shocked to learn that he supposedly demoted humans from the center of the universe
· What everyone gets wrong about Galileo’s clash with the Church, and why it matters today
· Why the vastness of the universe does not deal a blow to religious belief in human significance
· How the popular account of Giordano Bruno as a “martyr for science” ignores the fact that he was executed for theological reasons, not scientific ones
· How a new myth is being positioned to replace religion—a futuristic myth that sounds scientific but isn’t

In debunking these myths, Keas shows that the real history is much more interesting than the common narrative of religion at war with science.

This accessible and entertaining book offers an invaluable resource to students, scholars, teachers, homeschoolers, and religious believers tired of being portrayed as anti-intellectual and anti-science.