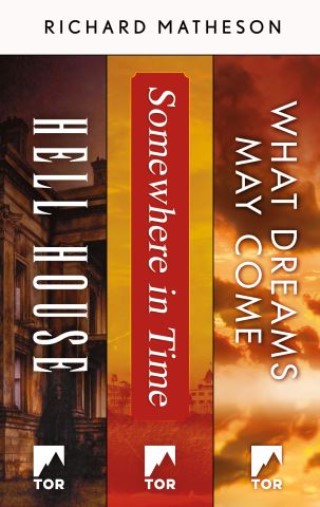 Hell House, Somewhere in Time, What Dreams May Come

A collection of three novels by New York Time bestselling author Richard Matheson, who Stephen King called "[t]he author who influenced me the most as a writer."

Hell House: Rolf Rudolph Deutsch is going die. But when Deutsch, a wealthy magazine and newspaper publisher, starts thinking seriously about his impending death, he offers to pay a physicist and two mediums, one physical and one mental, $100,000 each to establish the facts of life after death.

Dr. Lionel Barrett, the physicist, accompanied by the mediums, travel to the Belasco House in Maine, which has been abandoned and sealed since 1949 after a decade of drug addiction, alcoholism, and debauchery. For one night, Barrett and his colleagues investigate the Belasco House and learn exactly why the townfolks refer to it as the Hell House.

Somewhere in Time: A powerful story of a love that transcends time and space, written by one of the Grand Masters of modern fantasy.

Matheson's classic novel tells the moving, romantic story of a modern man whose love for a woman he has never met draws him back in time to a luxury hotel in San Diego in 1896, where he finds his soul mate in the form of a celebrated actress of the previous century. Somewhere in Time won the World Fantasy Award for Best Novel, and the 1979 movie version, starring Christopher Reeve and Jane Seymour, remains a cult classic.

What Dreams May Come: What happens to us after we die? Chris Nielsen had no idea, until an unexpected accident cut his life short, separating him from his beloved wife, Annie. Now Chris must discover the true nature of life after death.

But even Heaven is not complete without Annie, and when tragedy threatens to divide them forever, Chris risks his very soul to save Annie from an eternity of despair. Matheson's powerful tale of life---and love---after death was the basis for the Oscar-winning film starring Robin Williams.

Richard Matheson: Richard Matheson (1926-2013) was The New York Times bestselling author of I Am Legend, Hell House, Somewhere in Time, The Incredible Shrinking Man, Now You See It…, and What Dreams May Come, among others. He was named a Grand Master of Horror by the World Horror Convention, and received the Bram Stoker Award for Lifetime Achievement. He has also won the Edgar, the Spur, and the Writer's Guild awards. In 2010, he was inducted into the Science Fiction Hall of Fame. In addition to his novels Matheson wrote several screenplays for movies and TV, including several Twilight Zone episodes.