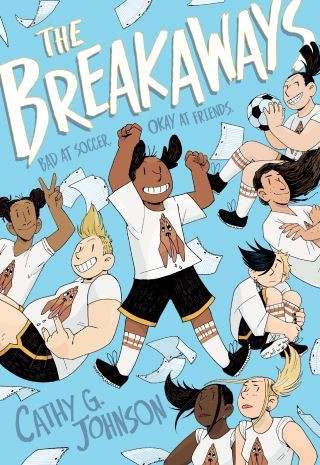 Quiet, sensitive Faith starts middle school already worrying about how she will fit in. To her surprise, Amanda, a popular eighth grader, convinces her to join the school soccer team, the Bloodhounds. Having never played soccer in her life, Faith ends up on the C team, a ragtag group that’s way better at drama than at teamwork. Although they are awful at soccer, Faith and her teammates soon form a bond both on and off the soccer field that challenges their notions of loyalty, identity, friendship, and unity.

The Breakaways from Cathy G. Johnson is a raw, and beautifully honest graphic novel that looks into the lives of a diverse and defiantly independent group of kids learning to make room for themselves in the world.

Cathy G. Johnson: Cathy G. Johnson is a cartoonist and educator in Providence, Rhode Island. The Breakaways is her third graphic novel, after Gorgeous (2016) with Koyama Press and Jeremiah (2015) with One Percent Press. Cathy has also published shorter comics work with publishers such as Silver Sprocket and Youth in Decline. In addition to creating artwork, Cathy works as an educator in the New England area, serving many local communities within schools and community centers.