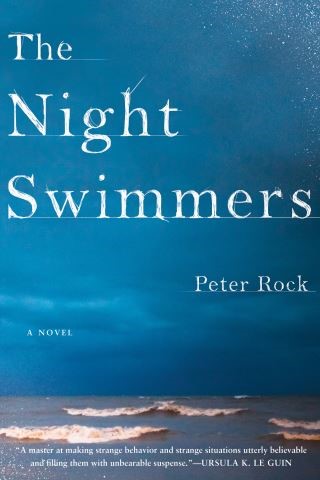 “Swimming at night, to compare its slipperiness to that of a dream would be to ignore the work of staying afloat, the mesmerism brought on by the rhythm, the repetition of the strokes.”

Beneath the surface of Lake Michigan there are vast systems: crosscutting currents, sudden drop-offs, depths of absolute darkness, shipwrecked bodies, hidden places. Peter Rock’s stunning autobiographical novel begins in the ’90s on the Door Peninsula of Wisconsin. The narrator, a recent college graduate, and a young widow, Mrs. Abel, swim together at night, making their way across miles of open water, navigating the currents and swells and carried by the rise and fall of the lake. The nature of these night swims, and of his relationship to Mrs. Abel, becomes increasingly mysterious to the narrator as the summer passes, until the night that Mrs. Abel disappears.

Twenty years later, the narrator—now married with two daughters—tries to understand those months, his forgotten obsessions and dreams. Digging into old notebooks and letters, as well as clippings he’s preserved on the “psychic photography” of Ted Serios and scribbled quotations from Rilke and Chekhov, the narrator rebuilds a world he’s lost. He also looks for clues to the fate of Mrs. Abel, and begins once again to swim distances in dark water.

Peter Rock: Peter Rock is the author of nine previous works of fiction, including My Abandonment, which won the Alex Award and was adapted into the film Leave No Trace. He is the recipient of a Guggenheim Fellowship and a National Endowment for the Arts Fellowship, and is a professor of creative writing at Reed College. He lives in Portland with his wife and two daughters.