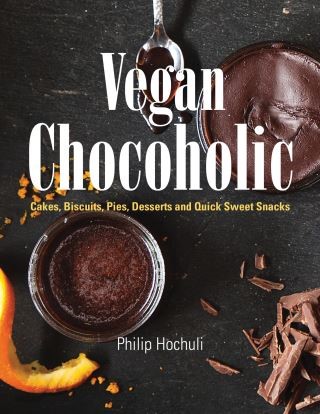 If you’re a vegan who finds a day without chocolate unimaginable, Vegan Chocoholic is your guide to indulging in decadent chocolate desserts without sacrificing your healthy lifestyle. You’ll find everything from classics like Sachertorte or Chocolate Amaretti to new creations like Almond and Chocolate Panna Cotta with Berry Sauce, Chocolate Sushi, Chocolate Yoghurt and Chocolate Focaccia with Rosemary and Sea Salt.

Offering simple recipes for cakes, pies, cookies, and brownies, as well as chocolate spreads such as vegan Nutella, vegan chef Philip Holchuli demonstrates not only how to make your own rich, satisfying vegan chocolate, but how to use it in a multitude of dishes. Including a guide to gluten-free, sugar-free, and soy-free options, and using ingredients that can be found in any supermarket, VeganChocoholic is a must-have for home cooks, vegans, and chocolate lovers alike.

“Author, Philip Hochuli . . . has succeeded in promoting the positive qualities of vegan cuisine in a remarkably straightforward manner, and how it can deliver culinary delights.” —Vegan Magazine

“In Vegan Chocoholic, prominent vegan author and chef Philip Hochuli takes up the challenge of making vegan desserts that offer appeal and intensity . . . If you follow a vegan lifestyle, then Vegan Chocoholic will be a welcome dessert avenue.” —Brian O’Rourke, The Huffington Post