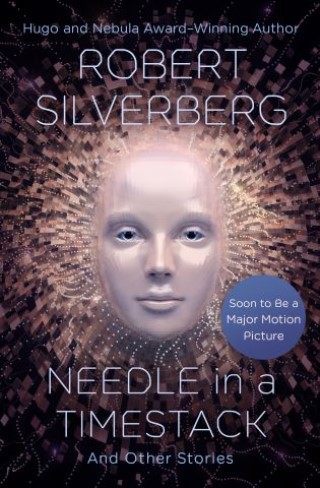 Needle in a Timestack

A collection of twenty classic stories from the Science Fiction Grand Master who “seems capable of amazements beyond those of mere mortals” (The Washington Post Book World).

Needle in a Timestack is Robert Silverberg at his very best—intelligent, inventive, and visionary. This collection showcases his talent for thought-provoking science fiction, ranging in themes from time travel to space travel, the media to mortality.

In the titular story—under development as a feature film by Oscar-winning screenwriter John Ridley—a jealous ex-husband warps time in a vindictive attempt to destroy his former wife’s new marriage. Thirty-one identical sons have a shocking surprise for their mother in “There Was an Old Woman.” The prophetic “The Pain Peddlers” depicts reality TV in a way that allows viewers to revel in a voyeuristic, adrenaline-fueled rush. Also included are Silverberg’s Hugo Award–winning “Enter a Soldier. Later: Enter Another,” and the Locus Award winner “The Secret Sharer,” a Joseph Conrad–inspired tale of a ship captain drawn into a strange alliance with a stowaway.

The New York Times Book Review hailed Silverberg as “the John Updike of science fiction.” The stories in Needle in a Timestack unite us in our humanity, in the face of science, technology, and our own changing culture.