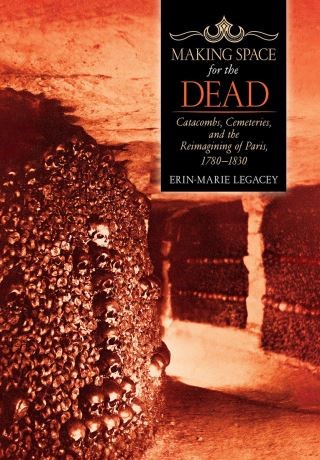 Making Space for the Dead

The dead of Paris, before the French Revolution, were most often consigned to mass graveyards that contemporaries described as terrible and terrifying, emitting "putrid miasmas" that were a threat to both health and dignity. In a book that is at once wonderfully macabre and exceptionally informative, Erin-Marie Legacey explores how a new burial culture emerged in Paris as a result of both revolutionary fervor and public health concerns, resulting in the construction of park-like cemeteries on the outskirts of the city and a vast underground ossuary.

Making Space for the Dead describes how revolutionaries placed the dead at the center of their republican project of radical reinvention of French society and envisioned a future where graveyards would do more than safely contain human remains; they would serve to educate and inspire the living. Legacey unearths the unexpectedly lively process by which burial sites were reimagined, built, and used, focusing on three of the most important of these new spaces: the Paris Catacombs, Père Lachaise cemetery, and the short-lived Museum of French Monuments. By situating discussions of death and memory in the nation's broader cultural and political context, as well as highlighting how ordinary Parisians understood and experienced these sites, she shows how the treatment of the dead became central to the reconstruction of Parisian society after the Revolution.