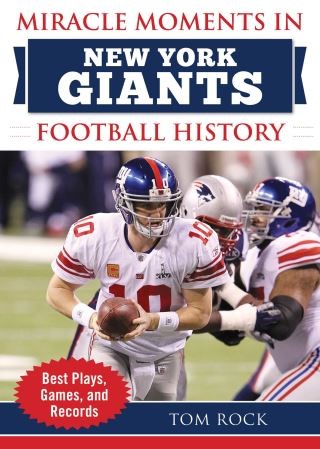 A collection of the most special moments from throughout Giants history!
With 32 playoff appearances under their belt, the New York football Giants comprise one of the oldest and most successful teams in pro football history. In Miracle Moments in New York Giants Football History, Newsday’s Tom Rock highlights the team’s greatest achievements over the course of its remarkable history. Some of the many moments Rock details include:

With full-color images to accompany Rock’s detailed story-telling, this book makes the perfect gift for any fan of Big Blue!

Tom Rock: Tom Rock is an award-winning sports journalist for Newsday in New York, where he has worked since 1996. He has covered the NFL since 2006 and the New York Giants since 2008. His articles have been cited in the 2005 edition of The Best American Sports Writing and recognized by the APSE (Associated Press Sports Editors), New York Press Club, Press Club of Long Island, and the New York City Chapter of the Society of Professional Journalists. He is the author of the novel Game Seven. Rock lives in Sound Beach, New York, with his wife and three children.