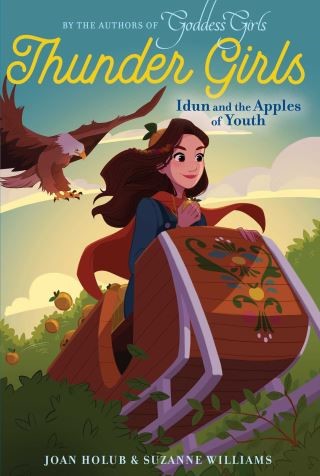 Idun and the Apples of Youth

From the authors of the Goddess Girls series comes the third book in a series steeped in Norse mythology, magic, adventure, and friendship.

Twelve-year-old Idun is the goddess of youth, and her magical and deliciously sweet golden apples are what keep all of the academy’s gods and goddesses healthy and youthful. They grow year-round—even in winter snow—in one very special grove in Asgard.

But when the mischievous Loki ends up making a bet that jeopardizes Idun—and her powerful apples—she must figure out a way to protect herself and her magical orchards from a giant who wants those apples all to himself! Can Idun save the apples—and the gods and goddesses who rely on them—from the two bad seeds at Asgard Academy?

Joan Holub: Joan Holub has authored and/or illustrated over 140 children’s books, including the Goddess Girls series, the Heroes in Training series, the New York Times bestselling picture book Mighty Dads (illustrated by James Dean), and Little Red Writing (illustrated by Melissa Sweet). She lives in North Carolina and is online at JoanHolub.com.Suzanne Williams is a former elementary school librarian and the author of over seventy books for children, including the award-winning picture books Library Lil (illustrated by Steven Kellogg) and My Dog Never Says Please (illustrated by Tedd Arnold), and several chapter book and middle grade series. She also coauthors the Goddess Girls and Thunder Girls series with the fantastic Joan Holub. Visit her at Suzanne-Williams.com.