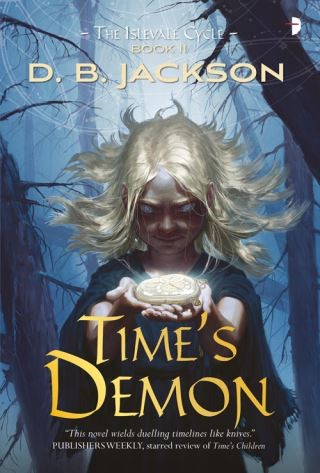 BOOK II OF THE ISLEVALE CYCLE

Two time-traveling heroes must change the future before they are murdered in the past, in the incredible fantasy sequel to Time's Children

Fifteen year-old Tobias Doljan Walked back in time to prevent a war, but instead found himself trapped in an adult body, his king murdered and with an infant princess, Sofya, to protect. Now he has been joined by fellow Walker and Spanner, Mara, and together they must find a way to undo the timeline which orphaned the princess and destroyed their future. Arrayed against them are assassins who share their time-traveling powers, but have dark ambitions of their own, and the Tirribin demon, Droë, whose desperate quest for human love and Tobias leads her into alliances which threaten all of Islevale.

File Under: Fantasy [ Time Killers | Span the Divide | Back to a Future | Enemies at Heart ]

D B Jackson: D B JACKSON is the Crawford Fantasy Award-winning author of more than twenty novels and as many short stories. He has written epic fantasy, contemporary fantasy, the occasional media tie-in, and historical fiction. David has a Master’s and PhD in US history. His books have been translated into a dozen languages. He and his family live in the mountains of Appalachia in the United States.