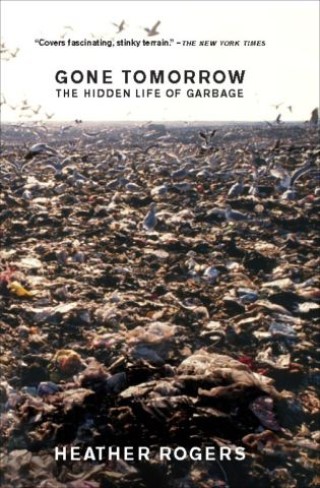 The Hidden Life of Garbage

“A galvanizing exposé” of America’s trash problem from plastic in the ocean to “wasteful packaging, bogus recycling, and flawed landfills and incinerators” (Booklist, starred review).

Eat a take-out meal, buy a pair of shoes, or read a newspaper, and you’re soon faced with a bewildering amount of garbage. The United States is the planet’s number-one producer of trash. Each American throws out 4.5 pounds daily. But garbage is also a global problem. Today, the Pacific Ocean contains six times more plastic waste than zooplankton. How did we end up with this much rubbish, and where does it all go? Journalist and filmmaker Heather Rogers answers these questions by taking readers on a grisly and fascinating tour through the underworld of garbage.

Gone Tomorrow excavates the history of rubbish handling from the nineteenth century to the present, pinpointing the roots of today’s waste-addicted society. With a “lively authorial voice,” Rogers draws connections between modern industrial production, consumer culture, and our throwaway lifestyle (New York Press). She also investigates the politics of recycling and the export of trash to poor countries, while offering a potent argument for change.

“A clear-thinking and peppery writer, Rogers presents a galvanizing exposé of how we became the planet’s trash monsters. . . . [Gone Tomorrow] details everything that is wrong with today’s wasteful packaging, bogus recycling, and flawed landfills and incinerators. . . . Rogers exhibits black-belt precision.” —Booklist, starred review