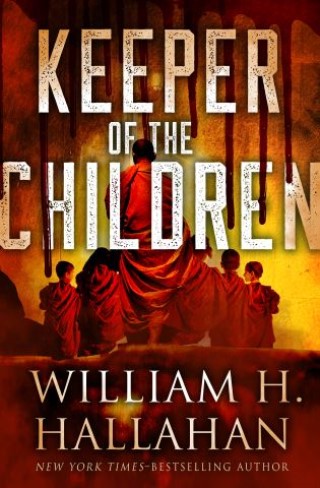 Keeper of the Children

Eddie Benson is a typical middle-class father with a secure job, a home in suburban Philadelphia, and a seemingly happy family. For Benson life holds no fear or terror. Then something unusual happens. One day his daughter, Renni, a normal, fun-loving fourteen-year-old, disappears.

Soon after, Eddie finds her wandering the streets of Philadelphia with a band of children. Dressed in orange robes, they bear drums and tambourines and cymbals. Moving through the crowds, they dance and sing and proffer metal bowls for coins. The children refuse to return to their homes. The youngsters, their parents have learned, are living with a mysterious Tibetan monk with strange, otherworldly powers. What follows is a series of bone-chilling incidents, each more violent than the last, all inexplicable. Only Eddie Benson will not abandon hope. And to rescue his child, Eddie must run a terrible risk, one that could cost him his life and his soul.

“Hallahan improbably makes it work. . . . A careful and serious writer, making the absurd plausible and wringing satisfying suspense out of it.” —Too Much Horror Fiction

William H. Hallahan:
William H. Hallahan (1925–2019) was an Edgar Award–winning American author whose works spanned genres but who was best known for his bestselling mystery and occult novels. His first novel, The Dead of Winter, was nominated for the Edgar Award for Best First Mystery Novel, and his suspense novel, Catch Me: Kill Me, won the Edgar Award for Best Mystery Novel. Hallahan’s occult novel, The Search for Joseph Tully, was a New York Times bestseller and hailed as one of the best books of its genre. For the book opening, mock gravestones that read “Here Lies Joseph Tully” were lined up and down Park Avenue in New York. His other works of fiction include The Ross Forgery, Keeper of the Children, The Trade, The Monk, Foxcatcher, and Tripletrap. His works were translated into many languages and released throughout the world.

Hallahan was born in the shadow of Ebbets Field, Brooklyn; spent three years in the Navy; graduated with honors and a master’s degree from Temple University; and worked variously as a college English professor, a copywriter, and an ad agency proprietor in his own agency, Hallahan Incorporated.