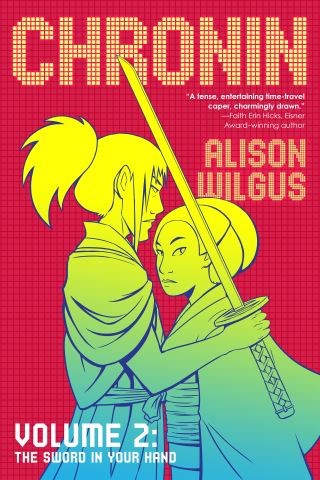 Chronin Volume 2: The Sword in Your Hand

Samurai Jack meets Back to the Future in Alison Wilgus’s Chronin Volume 2: The Sword in Your Hand, a thrilling conclusion to a time-bending graphic novel duology

Japan's history will never be the same. The timeline has veered off course with the abrupt deaths of prominent players in the nation's past, influencers who were supposed to start the Meiji Restoration. Now Mirai Yoshida, former Japanese-American undergrad turned samurai on the lam, may never find her way back to where she belongs.

Unless a high-stakes plan is enacted. With help from her newfound friends, Mirai must instigate a peasant uprising to correct the course of history. But in order to succeed, she faces a dangerous and powerful fellow time traveler, an enemy who accidentally glimpsed his country's destiny and didn't like what he saw.

Chronin, Volume 2: The Sword in Your Hand concludes the adrenaline-fueled adventure that asks: when time is of the essence, is it more important to save yourself or the future?

Follow the story from the beginning in Chronin, Vol #1: The Knife at Your Back!

Alison Wilgus: ALISON WILGUS is a Brooklyn-based bestselling writer, editor and cartoonist who's been working in comics for over a decade. She is the author of the SF graphic novel duology, Chronin (Tor Books), which NPR called “timeless in more ways than one,” and Book Riot called “magical,” and which has garnered a host of glowing reviews. Her middle grade graphic novel Science Comics: Flying Machines was named one of the National Science Teachers Association’s Best STEM Books for 2018, and was an Amazon Holiday Toy List Pick. Her next nonfiction graphic work, The Mars Challenge, is forthcoming from First Second. Her New York Times bestselling work has been published by DC Comics, Dark Horse, Del Rey, and Scholastic, and she served as a script and story writer for Cartoon Network's "Codename: Kids Next Door." In her spare time, she co-hosts a podcast about comics publishing called “Graphic Novel TK” with Gina Gagliano.