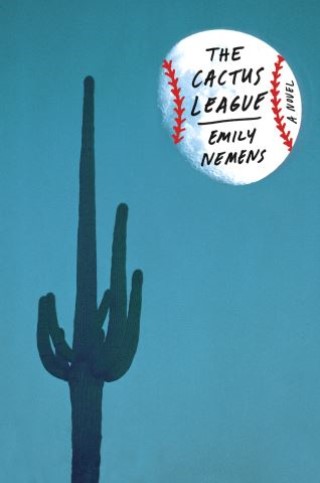 "In The Cactus League [Emily Nemens] provides her readers with what amounts to a miniature, self-enclosed world that is funny and poignant and lovingly observed." --Charles McGrath, The New York Times Book Review

A New York Times Book Review Editors' Choice. One of The Wall Street Journal's 10 New Books You Should Be Picking Up First In 2020 and one of The Millions' Most Anticipated Books of 2020

An explosive, character-driven odyssey through the world of baseball from Emily Nemens, the editor of The Paris Review

Jason Goodyear is the star outfielder for the Los Angeles Lions, stationed with the rest of his team in the punishingly hot Arizona desert for their annual spring training. Handsome, famous, and talented, Goodyear is nonetheless coming apart at the seams. And the coaches, writers, wives, girlfriends, petty criminals, and diehard fans following his every move are eager to find out why—as they hide secrets of their own.

Humming with the energy of a ballpark before the first pitch, Emily Nemens's The Cactus League unravels the tightly connected web of people behind a seemingly linear game. Narrated by a sportscaster, Goodyear’s story is interspersed with tales of Michael Taylor, a batting coach trying to stay relevant; Tamara Rowland, a resourceful spring-training paramour, looking for one last catch; Herb Allison, a legendary sports agent grappling with his decline; and a plethora of other richly drawn characters, all striving to be seen as the season approaches. It’s a journey that, like the Arizona desert, brims with both possibility and destruction.

Anchored by an expert knowledge of baseball’s inner workings, Emily Nemens's The Cactus League is a propulsive and deeply human debut that captures a strange desert world that is both exciting and unforgiving, where the most crucial games are the ones played off the field.

Emily Nemens: Emily Nemens is the editor of The Paris Review. She was previously the co-editor of The Southern Review. Her work has been published in Esquire, n+1, The Gettysburg Review, Hobart and elsewhere, and she is the author of The Cactus League.