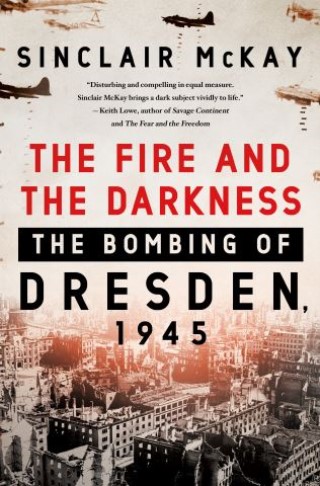 The Fire and the Darkness

A gripping work of narrative nonfiction recounting the history of the Dresden Bombing, one of the most devastating attacks of World War II.

On February 13th, 1945 at 10:03 PM, British bombers began one of the most devastating attacks of WWII: the bombing of Dresden. The first contingent killed people and destroyed buildings, roads, and other structures. The second rained down fire, turning the streets into a blast furnace, the shelters into ovens, and whipping up a molten hurricane in which the citizens of Dresden were burned, baked, or suffocated to death.

Early the next day, American bombers finished off what was left. Sinclair McKay’s The Fire and the Darkness is a pulse-pounding work of history that looks at the life of the city in the days before the attack, tracks each moment of the bombing, and considers the long period of reconstruction and recovery. The Fire and the Darkness is powered by McKay’s reconstruction of this unthinkable terror from the points of view of the ordinary civilians: Margot Hille, an apprentice brewery worker; Gisela Reichelt, a ten-year-old schoolgirl; boys conscripted into the Hitler Youth; choristers of the Kreuzkirche choir; artists, shop assistants, and classical musicians, as well as the Nazi officials stationed there.

What happened that night in Dresden was calculated annihilation in a war that was almost over. Sinclair McKay’s brilliant work takes a complex, human, view of this terrible night and its aftermath in a gripping book that will be remembered long after the last page is turned.

Sinclair McKay: SINCLAIR MCKAY is the bestselling author of The Secret Lives of Codebreakers (published in the UK as The Secret Life of Bletchley Park) and The Secret Listeners for Aurum, as well as several other books. Sinclair is a literary critic for the Telegraph and The Spectator and for three years was a judge of the Encore Prize, awarded annually for best second novel. He lives in the shadow of Canary Wharf in east London.