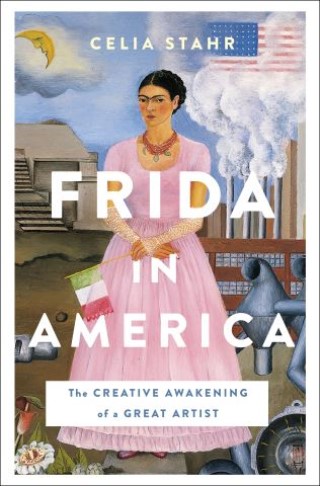 The Creative Awakening of a Great Artist

Mexican artist Frida Kahlo adored adventure. In November, 1930, she was thrilled to realize her dream of traveling to the United States to live in San Francisco, Detroit, and New York. Still, leaving her family and her country for the first time was monumental.

Only twenty-three and newly married to the already world-famous forty-three-year-old Diego Rivera, she was at a crossroads in her life and this new place, one filled with magnificent beauty, horrific poverty, racial tension, anti-Semitism, ethnic diversity, bland Midwestern food, and a thriving music scene, pushed Frida in unexpected directions. Shifts in her style of painting began to appear, cracks in her marriage widened, and tragedy struck, twice while she was living in Detroit.

Frida in America is the first in-depth biography of these formative years spent in Gringolandia, a place Frida couldn’t always understand. But it’s precisely her feelings of being a stranger in a strange land that fueled her creative passions and an even stronger sense of Mexican identity. With vivid detail, Frida in America recreates the pivotal journey that made Senora Rivera the world famous Frida Kahlo.

Celia Stahr: Celia Stahr is a professor at the University of San Francisco, where she specializes in modern American and contemporary art with an emphasis on feminist art and gender studies, as well as African and multicultural art. She holds a Doctorate of Philosophy from the University of Iowa and lives in the Bay Area.