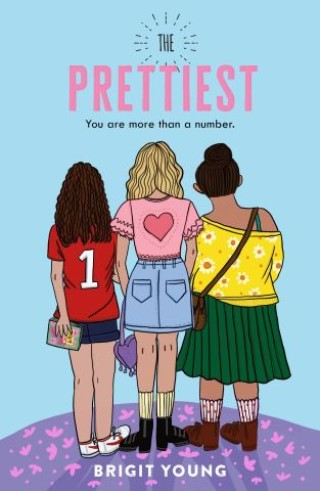 A must-read for young feminists, The Prettiest is an incisive, empowering novel by Brigit Young about fighting back against sexism and objectification.

THE PRETTIEST: It’s the last thing Eve Hoffmann expected to be, the only thing Sophie Kane wants to be, and something Nessa Flores-Brady knows she’ll never be . . . until a list appears online, ranking the top fifty prettiest girls in the eighth grade.

Eve is disgusted by the way her body is suddenly being objectified by everyone around her.
Sophie is sick of the bullying she’s endured after being relegated to number two.
And Nessa is tired of everyone else trying to tell her who she is.

It’s time for a takedown. As the three girls band together, they begin to stand up not just for themselves, but for one another, too.

Brigit Young: Brigit Young, born and raised in Ann Arbor, Michigan, has published poetry and short fiction in numerous literary journals. She is a proud graduate of the City College of New York, and has taught creative writing to kids of all ages in settings ranging from workshops at Writopia Lab to bedsides at a pediatric hospital. Brigit is the author of the middle grade novels Worth a Thousand Words and The Prettiest. She lives in Brooklyn with her husband and daughters.