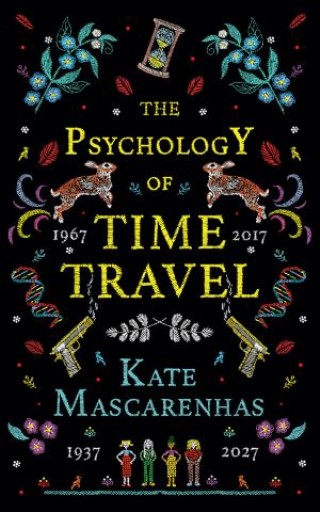 The Psychology of Time Travel

"Astonishing." —The New York Times
"A fascinating meditation on the many ways traveling through time can change a person." —HelloGiggles
"This genre-bending, time-bending debut will appeal to fans of Doctor Who, dystopian fiction, and life's great joy: friend groups."—Refinery29

In 1967, four female scientists worked together to build the world’s first time machine. But just as they are about to debut their creation, one of them suffers a breakdown, putting the whole project—and future of time travel—in jeopardy. To protect their invention, one member is exiled from the team—erasing her contributions from history.

Fifty years later, time travel is a big business. Twenty-something Ruby Rebello knows her beloved grandmother, Granny Bee, was one of the pioneers, though no one will tell her more. But when Bee receives a mysterious newspaper clipping from the future reporting the murder of an unidentified woman, Ruby becomes obsessed: could it be Bee? Who would want her dead? And most importantly of all: can her murder be stopped?

Traversing the decades and told from alternating perspectives, The Psychology of Time Travel introduces a fabulous new voice in fiction and a new must-read for fans of speculative fiction and women’s fiction alike.

Kate Mascarenhas: Kate Mascarenhas is a half-Irish, half-Seychellois midlander. Since 2017, Kate has been a chartered psychologist. Before that she worked as a copywriter, a dollhouse maker, and a bookbinder. She lives with her husband in a small terraced house which she is slowly filling with Sindy dolls. This is her first novel.