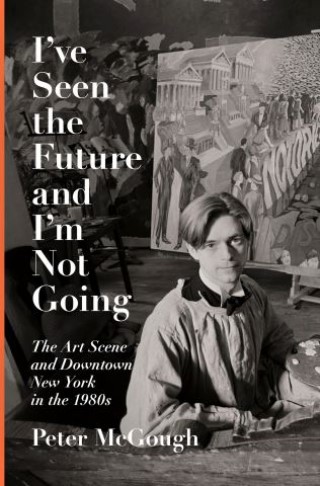 I've Seen the Future and I'm Not Going

The Art Scene and Downtown New York in the 1980s

Brilliantly funny, frank, and shattering, this is the bittersweet memoir by Peter McGough of his life with artist David McDermott. Set in New York’s Lower East Side of the 1980s and mid-1990s, it is also a devastatingly candid look at the extreme naiveté and dysfunction that would destroy both their lives.

Escaping the trauma of growing up gay in Syracuse and being bullied at school, McGough attended art school in New York, dropped out, and took out jobs in clubs, where he met McDermott. Dazzled by McDermott, whom he found fascinating and worldly, McGough agreed to collaborate with him not only on their art but also in McDermott’s very entertaining Victorian lifestyle. McGough evokes the rank and seedy East Village of that time, where he encountered Keith Haring, Rene Ricard, Kenny Scharf, Jean-Michel Basquiat, Andy Warhol, and Jacqueline and Julian Schnabel, among many others. Nights were spent at the Ninth Circle, Danceteria, and Studio 54; going to openings at the FUN Gallery; or visiting friends in the Chelsea Hotel. By the mid-1980s, McDermott & McGough were hugely successful, showing at three Whitney Biennials, represented by the best galleries here and abroad, and known for their painting, photography and “time experiment” interiors. Then, overnight, it was all gone. And one day in the mid-1990s, McGough would find that he, like so many of his friends, had been diagnosed with AIDS.

I’ve Seen the Future and I’m Not Going is a compelling memoir for our time, told with humor and compassion, about how lives can become completely entwined even in failure and what it costs to reemerge, phoenix-like, and carry on.

Peter McGough: PETER McGOUGH is an artist who has collaborated with David McDermott since 1980 as McDermott & McGough. They are known for their work in painting and photography. McGough divides his time between Dublin and New York City.