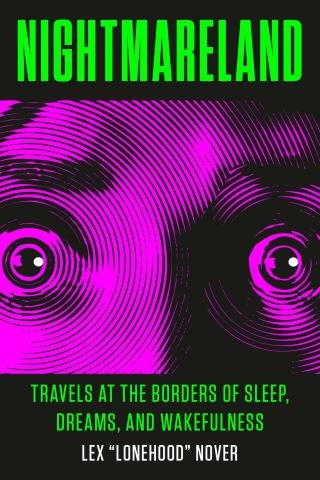 Travels at the Borders of Sleep, Dreams, and Wakefulness

From a Coast to Coast AM insider, a mind-expanding exploration of sleep disorders and unusual dream states--the scientific explanations and the paranormal possibilities.

The sleeping mind is a mysterious backdrop that science is just beginning to shed light on. It was only some sixty years ago that researchers discovered REM, the rapid-eye-movement cycle that's associated with dreams. In Nightmareland, Lex "Lonehood" Nover travels into the eerie borderlands where the unconscious, dreams, and strange entities intermingle under the cover of night, revealing wider and hidden aspects of ourselves, from the savage and frightening to the astounding and sublime.

Encompassing accepted medical phenomena such as sleep paralysis, parasomnias, and Ambien "zombies," and the true-crime casebook of those who kill while sleepwalking, to supernatural elements such as the incubus, alien abduction, and psychic attacks, Nover brings readers on an extraordinary journey through history, folklore, and science, to help us understand what happens when we sleep.

Lex Lonehood Nover: Lex "Lonehood" Nover has been the web producer for Coast to Coast AM, America's most popular overnight radio show, since 2002. His work is considered a valuable resource for anyone studying the paranormal, fringe science, and alternative theories.